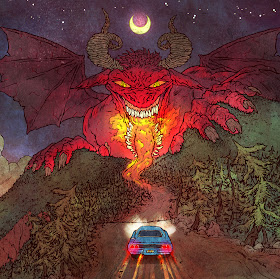 Alright...before we go any further, I need you to do me a favor. Run to the fridge and grab yourself a cold one...I'll wait right here.

Okay, you ready? Good. Now take a big gulp out of that can of suds and listen closely. I've found the fountain of youth. No shit...I got it right here. It's called Infernal Overdrive. You interested in something like that? Yeah I thought you might be. You see, these boys from Red Bank, New Jersey have found a way to conjure the spirits from rock & roll's glory daze. You know...bands like Aerosmith, Cheap Trick and AC/DC? You remember those times don't you? I'm sure it's a little foggy, but that's okay. I'm talking about the 70's and 80's, a time when rock music was all about excess...it was dangerous...it got you laid...and dammit, it was fucking fun!

Fast forward to 2012 and let that familiar feeling wash over you once again. Just listen to the bluesy raunch of Rich Miele's guitar on the opening track of Infernal Overdrive's Last Rays of the Dying Sun. Or better yet, check out Marc Schleicher's vocals as he summons the spirit of the late Ronnie Van Zant as he sings "heading down the road...feel like I'm losing my mind." And when his brother, bassist Keith Schleicher joins he and Rich in the harmonized chorus of "moving on again" you'll think you've died and gone to 1975.

Hell, the guitars on track two, "The Edge", shoot out of the gates fast enough to make even Angus Young start sweating. And speaking of guitars, I hope you like 'em, cuz you're gonna get an ear full of 'em. You see Marc's not only the singer, he plays a mean axe as well and between he and Rich...well they'll cram a solo anywhere they damn well feel like it. You're gonna love it when these dudes harmonize the chorus..."I live, I live, I live on the edge" and then Marc gets all smartass with "I'm gonna fall" and the song erupts into a gnarly solo...yeah that's right, gnarly.

"Duel" starts off with a nice beat from drummer Mike Bennett and seems like it's headed for more classic rock territory, but then Infernal Overdrive throws a curve ball as they introduce a bit of stoner rock groove, making the song sound something like Lynyrd Skynyrd fighting off Grendel, Snowman. "Cage" sees the band continuing to expand on their signature mix of loose improvisation with tight, heavy riffage. Only here they pull out all the stops by throwing in little tricks of the trade...like a quick guitar flourish between verses...or shouts of "alright" and "uh huh"...or my personal favorite...hand claps...hand claps people!

"Deported to Jersey" keeps the mood light and the music dirty...damn I bet these guys are fantastic live! This bluesy romp rollicks along for three and a half minutes before shifting into a completely different chord progression accompanied by a sing-a-long of "I need your love...get you on my side" and finally ending with an old school fade and return. Seriously, when is the last time you heard a song fade out and then come back in mid-chorus...1987? Nice!

"Electric Street Cred" (best song title ever) is Infernal Overdrive showing that they don't have to sound retro to write a killer rock song. This one is a straight up monstrosity of riffs layered on top of more riffs and it features an incredibly catchy, echoed vocal effect and...wait for it...a fucking drum solo shoved right into its ass end! Yeah that's right, after all the guitar wankery on display for the first three quarters of Last Rays of the Dying Sun, Bennett finally gets an opportunity to showcase his skills behind the kit.

The album's final two songs are polar opposites, but two of its strongest nonetheless. First comes a cover of Ace Frehley's "Rip It Out" that will make you forget you're not actually listening to KISS. Honestly, Marc Schleicher is such a dead ringer for Gene Simmons on this one, it's kinda scary. And the last song sees the band shift back into stoner rock mode as they settle in for the long haul. "Motor" is a hazy, groovy, psychedelic jam session that rolls along for almost 15 minutes and calls to mind everything from Kyuss to the Jimi Hendrix Experience to Soundgarden all in the span of the same song. Between you and me, this one alone is worth the price of admission.

So by now you should have a pretty good feeling of what you're in for with Infernal Overdrive. Last Rays of the Dying Sun hearkens back to the 70's and 80's heyday of unapologetic, guitar driven, blues inflected, rawk & roll. They're not out to solve the world's problems and they sure as hell can't fix yours. But what they can offer is an escape...an escape from the everyday doldrums and a sonic journey to someplace where you can get away...someplace where you can rock & roll all night and party everyday. If you can remember when music was like that...or if you're too young and you only wish you could...then I encourage you to come along on this ride because you will not be disappointed.