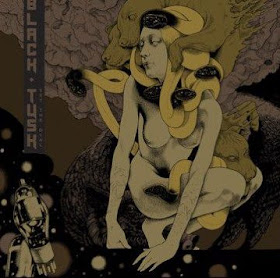 How hot and thick does Savannah REALLY get? I've heard stepping outside can feel like having a wet towel thrown on your face, but I can't say I've ever visited the southern metal hotbed that seems to encompass the entire Peach State. On October 25th, swamp-dwelling Black Tusk will release Set The Dial, their fourth album and first since last year's blistering Taste The Sin. Judging by these ten tracks, it's safe to say Black Tusk didn't bother taking any time to cool off.

Keeping things dirty, Set The Dial coats your stereo with blazing sludge and douses it with hardcore punk for an awesomely evil, expertly-constructed groove that never lets up. Brewing the Storm is instrumental static, rolling with a rhythm that James Brown would rip-off if he hadn't died celebrating his own Georgia Christmas five years ago.

James May's drums speed through these 31 minutes like a junkie swallowing his highway stash as a trooper approaches. Bring Me Darkness and This Time is Divine showcase talents which beg the question: "Who's trying to keep up with who, exactly?" A song like Carved In Stone just wouldn't exist without May's double kick-drum, dropping anvils on a stomp-along that makes every other metal drummer sound sophomoric.

Ender of All is, of course, quick, dirty, and seemingly bruised up after a struggle with meth. Vocals battle and a static hum marries a low bass rumble, leaving ashes in your mouth in the form of a brilliant stop/start element. But what listeners will love about this song (and the entire fucking album) is how much GROOVE Black Tusk has managed to lay down. Whew, this train won't be stopped.

When Mass Devotion has you believing the tempo's letting up, you're met with dueling vocals and a guitar lick that wraps you in a straightjacket. Andrew Fidler layers his space-warble riffs and allows us to wallow in the mud and catch our breath, but he doesn't have time to worry about what we can endure. The track's brevity pairs with its spooky undertones to fully deliver what may be the album's most expansive, yet concise, sound.

Set The Dial signs off with dusty licks, archaic drums, and absolutely no time to scrape the shit from your bootheels. With Crossroads and Thunder, there's a storm coming. Get your shit and take a hike, stranger. We can't be certain what worries us: a drifter on a Harley, hogs feasting, or a swarm of itching locusts. But the sound is awesome, and Black Tusk is confident we won't take it personally when they tell us to get the fuck out.

From fade-in to fade-out, Set The Dial fails to disappoint. The institution of sped-up swamp sludge is alive and well in the Empire State of the South. Black Tusk have again fired up the grill, cracked a few cold ones, and blazed through their own blend of metal that's distinctly southern, distinctly Georgia, and distinctly dark. We're left buzzed, we're left buzzing, and we're left with one of 2011's best albums.