New Band To Burn One To: MELON 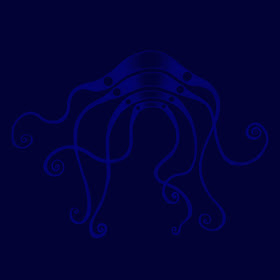 Melon was founded by David Doyen and Shawn Pratzner in 2003 in Wilmington, Delaware originally operating as the homemade recording project “Throat Wobbler Mangrove and the Post Nasal Drips”, an eclectic mix of esoteric lo-fi goofy weirdness influenced by Frank Zappa and Mike Patton. The project slowly evolved into more psychedelic/punk/stoner rock territory and Melon was born. In 2005, they recruited drummer Ernest Goldner and bassist Chris Haug (Giant Bags of Weed, Take Down Your Art) and eventually started writing songs as a collective unit. Since that time they have recorded three EP's (Drink of the Gods, Mirage, and A World of Monsters) and one full length titled "Never Eat on an Empty Stomach" as well as inclusion on the Delaware stoner rock compilation LP "Delaware Kills Everything" which also included Onita (members of Black Throat), Count Von Count, and Ape. Melon has been described as "a refreshing, exciting blend of stoner rock, psychedelic frequencies, noise and grunge that is all topped off with a weird set of quirks that makes it impossible to truly pigeonhole them into any exact corner." - (hellridemusic.com)

"It's about to get WEIRD in here!" Well, things got weird long before Turn Me On Deadman on Melon's new EP, A World of Monsters. That's not to say it won't rattle your speakers as you scratch your head and smile your ass off. As a fan of Butthole Surfers and Frank Zappa, I can safely say the quirks don't detract from the prolific hook-writing and incendiary bass rollicks Melon provides in these eight tracks.

Where guitars slice songwriting conventions and drums enter wind gusts like fine sand, the bass remains low, loose, and rumbling. Caterpillars channels D Boon with a punk sneer that's not TOO cocky. Rhythm cooks on Captain (TELL me you didn't just hear Nick Oliveri on QOTSA's Quick and to the Pointless) until Melon finds a brief, melodic, groove-laden breakdown that promises to be the coolest thing you'll hear today. Melon get plenty bluesy on tracks like Your Face Has Driven You to a Life of Villainy and, um... Gary Bluesy. These guys never get ridiculous, though. The songs are wildly enjoyable and well-constructed, knowing just when to pick it up or when to let the ash settle.

Melon have made this EP available through bandcamp at a price you can name yourself. Their third EP and fourth overall release, A World of Monsters won't fit under the umbrella of any label and it certainly won't help you sit still. If this is experimentation, I can't wait to see what these guys are capable of once they test their sonic hypotheses. This sound is gonna set up camp in your brain and never put out the fire.