New Band To Burn One To - Grand Selmer 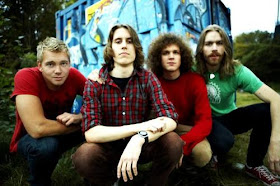 With one foot in pounding riff groove and the other foot in psychedelic rock, Grand Selmer is a band that will blow your mind and give you chills up your spine. The perfect hybrid between 70s (Black Sabbath, Cream, ZZ Top) and 90s rock (Foo Fighters, Queens of the Stone Age, Fu Manchu).

According to their bio, these four Swedes had some interesting experiences (to say the least) during a six month stint touring Deutschland. Lucky for all of us, Grand Selmer returned to their own homeland, fueled by massive quantities of German currywurst and Weiβbier, and proceeded to document their (mis)adventures the only way they knew how…in their music. The result was their first full length album “Tough Day of Relief” and it is as addictive a display of alternative rock as anything I’ve heard in the genre this year.

The guys are pretty much spot on in their self-description, although I’d say they fall a lot closer in line with the Foos and QOTSA than they do Black Sabbath. You’ll hear it as soon as you fire up the album and hear the dreamy guitars and melodic vocal fury of “In/Out”. And while I definitely hear the Homme-esque guitar work, particularly on the title track, I also hear the brash alterna-fuzz of Silversun Pickups in the music of Grand Selmer (check out “You Never Listen” and see if you agree). As for that sweet 70’s groove…it’s there, but it’s subtle…almost as if it encompasses the band’s care free attitude and their vibe more than it does their sound (listen to the instrumental “Fat Fuck” to see what I mean).

Tracks like “POA”, “Everseen” and “Ass Attack” on the other hand, feature a deliberate mix of punk rock ferocity and alterna-pop catchiness…THIS explains the nod to Foo Fighters in the bio. And “Mark F”, another instrumental, would easily be the most captivating song on the album if it weren’t for the two slower tracks ”Throw the Night Away” and “Berlin”, where the band seems completely comfortable in their own skin. As for the album’s final track, “Brothén”…you gotta hear this one. It takes the band’s ability to stylistically meld the 70’s with the 90’s and throws a balls-out, ass slapping funk jam into the mix…incredible!

When I hear a band like Grand Selmer, I’m blown away that we don’t hear more music like this on American rock radio. Albums like “Tough Day of Relief” are what make me want to scream when I hear people say “there isn’t any good rock music being made these days”...and that's something I unfortunately hear a lot. Listen to me…these guys are streaming this thing for free on their Facebook page and on Soundcloud. I can almost guarantee its better than 95% of the shit you’ve spent money on in the past month. Now do yourself a favor…click on the links and listen to this bad ass rock n roll.