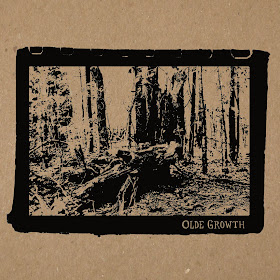 Olde Growth…the name itself conjures images of a forgotten landscape…overgrown, all encompassing…taking over. And the sound? Every bit as enveloping as that name implies. On this, their debut album, these two Bostonians, Stephen LoVerme (bass/vocals) and Ryan Berry (drums), overtake you with a steady diet of downtrodden riffs, plodding drum work and vocals so excruciating, they'll leave a pit of regret and longing in your stomach by the time the album is through. Sound like something you'd be interested in? Well read on.

The duo wastes no time getting started as "The Grand Illusion" erupts with a sludgy riff, a steady beat and cacophonous cymbals that'll keep your ears ringing for a week. But its LoVerme's tortured vocals that tie this monstrosity together as he erupts right out of the gates with this gem…"On these bloody battlegrounds, we sail a sinking ship…I've seen the future, and it don't look so grim." But what's cool about Olde Growth is that even though sludge is their calling card, it isn't what defines them. Make your way to the chorus of the song and listen as they shift into a sort of Fu Manchu vibe that seems to defy everything that came before it. The band's transition from sludgy doom to fuzzy groove is completely seamless and adds an insane amount of depth…this is what'll keep you coming back for repeated listenings.

"Life in the Present" opens with a sinister riff that could easily be the soundtrack to a death march….except I'm pretty sure it's an anti-suicide song, so maybe that's not the best description to use here. How do you like "down and out…dry and heaving…loss of hope…anguish being" as an opening salvo? But again, the dynamic of LoVerme's agonizing wails clashing up against his almost pleading clean vocals offer such a striking contrast its mesmerizing. And the song builds to a finale that sees Olde Growth unleash an unholy doom riff that is sure to snap necks.

The centerpiece of the album is the three part opus "Cry of Nazgul/The Second Darkness/To the Black Gate". The overall song is a sort of Tolkien-esque trilogy as it flows from one part to the next telling a tale of wraiths, orcs and legions of doom. "Cry of Nazgul" makes up the first five minutes of the track and features more pummeling riffage and devastating drums. But yet again its the vocals that carry the song's intensity to another level. From LoVerme's banshee shriek to his demonic growl, those vocals bring to life images of the song's subject matter. The next two minutes make up "The Second Darkness", where Olde Growth pick up the pace as they transition into an uptempo stoner rock jam and the last three minutes are "To the Black Gate", which is essentially a steady build up that leads to this epic conclusion…"blackened clouds stretch across the sky…to the black gate, see you on the other side."

But as much as I wanted that three part saga to be my favorite track…it wasn't. No, that honor goes to "Sequoia", an ode to the massive redwoods "of the western shore." The song just drips with passion and respect for nature's power and beauty. Just check out the chorus..."eons pass, empires fall, seasons change, the tree awakes." Here Olde Growth continues to marry the sounds of sludge with fuzz and the vocals continue to mix torment with a casual, mellow cool. But in the end, it's the torment that wins out as the duo delves into the doom laden riff that is the song's backbone and LoVerme blisters his throat on one final bout with that chorus.

In fact, the performance is so unabashedly intense, it's as if he's worn himself out, as it is the last we hear from the vocalist until the album's final act. "Red Dwarf" is the breather that follows…an interesting soundscape of echoed noise and feedback that brings to mind images of the star for which its named. This leads directly into another instrumental track, "Everything Dies", which features the guitar-like fuzz-tones of LoVerme's bass and a driving beat from Berry that sort of moves it through its progressions, steadily building and building until the song reaches a surprisingly subtle conclusion.

This ending is the inconspicuous and simultaneous beginning to the album's final song, which sees the duo incorporating jazzy drums and gentle bass strumming…until the hammer drops and Olde Growth remind you that this is ultimately about one thing and one thing only…the fucking heavy. The dichotomy of gentle build up followed by unrestrained aggression propels the song (…the album…the band) and when the vocalist finally unleashes his denouement…"Awake!!!"…tell me you don't have chills running up and down your spine.

Look…by now, you know whether or not you're gonna dig this shit. Olde Growth's debut LP is about frustration, anger, sorrow and pain broken up by moments of quiet introspection and solitude. It is beautifully aggressive and brutally honest. If that sounds like your kind of thing, then click these links, buy this album and hear what it sounds like when nature channels its screams through two human souls.