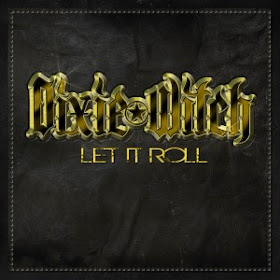 What's it been, guys? Five years? Dixie Witch's 2006 effort, Smoke and Mirrors, managed to firmly cement the band's status as Austin's booze-stained Boogie Rock gods. On 2011's Let It Roll, they demonstrate their continued dedication to the cause. You won't find any 8-minute opus on this disc, and you also won't find original guitarist Clayton Mills. What you're treated to, though, is ten fuzzy shards of jagged licks and rolling rhythms on the band's fourth release.

The opening title track springboards listeners into a sea of killer southern riffs and groove that, amazingly, don't melt away in the span of an all-too-quick 36 minutes. Let It Roll demonstrates cosmic admiration, hog-tied production, and one hell of a good time. This power trio ain't lettin' their amped knowledge of songwriting and instrumentation get in the way of leaving behind a trail of blistered lips and weak knees. Ladies must LOVE this shit.

New guitarist J.T. Smith gets his share of marquee billing on damn-near every southern stone on this disc, and rightly so. Boogie Man begins with a choppy axe/skin reach-around, but audiences are liable to get soaked in dark themes, lifted portside tempos, and a fuzzy breakdown that mimics a cool, buzzed rumble through misty morning debauchery. Follow it up with The High Deal, and you'll see exactly why J.T.'s giving hard-ons to record label execs. A confident crunch, flanked by smoked-out bass and soaring Van Halen pipes, hums until a soulful string ascent sets fire to this ballad and steps back as that old barn burns.

Ah, shit. I shouldn't lead you guys to think CC and Trinidad have thrown on leotards and stuffed their shorts à la David Lee Roth. Hell no. Red Song and Anthem are marching, fist-pumping tales of vengeance and loss. These dudes have had nothing handed to them, and beyond the fuzziness you'll hear three dudes that've been thrown into a few barbed-wire fences. Halfway through these songs, you'll be picking moss out of your hair and dirt from your nails.

Beyond their vocals, CC and Trinidad haven't forgotten how to lay down some thick black carpet. Trinidad's drums motor up sidewalks, knocking over blue-haired old ladies on Saving Grace. Sevens is the album's bounce-heavy gravel road to gambling addiction. Pair the low-end fuzz with some ashy licks and you barely notice your skin's a deep shade of beaten.

And when these assholes wanna pick it up and get scandalous, it seems to come easier than that drunk bitch down the block. Enjoy a quick roll through the hay with Automatic Lady all you want, and be sure and tell your friends. (You're also gonna need to burn those clothes, by the way). December is a perfect, frenetic closing to an album that doesn't let up and doesn't disappoint. Quick tempo parallels a quick mood, along with a guitar highlight that's gonna leave scars up your back.

Dixie Witch certainly haven't gotten clean. Let It Roll is loud exhaust pipes, spilled Lone Star, and a gaze or two at the heavens. But on the other hand, this band's not gonna let a little fuzz hide prodigious song craftsmanship. It's a nice balance. But if I'm ever able to catch these guys live, keeping a sober balance is the last thing I'll worry about.