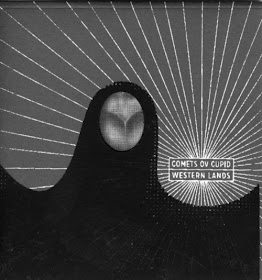 Before I even get started, it’s worth noting that Comets Ov Cupid is not in fact a band, but more the musical vision of one Jason Kesselring whose other projects include the Minneapolis based space rock outfit Skye Klad and the twisted take on folk that is The Satyrswitch. So with that in mind, its best you curb any notions of your standard guitar/bass/drum compositions and leave your expectations at the door. These are not songs in the traditional sense, but instead nine sonic journeys that will lead you somewhere…nowhere…anywhere…all at once.

Western Lands begins with an instrumental buzz bomb called “Spectres of an Airstream Futuropolis”, a quivering introduction to the beautiful dissonance that is Comets Ov Cupid. The song warbles and shimmers through your cranium with a measured dose of both grace and chaos that leads right into “Starship”. This one hints at traditional rock music with its grinding guitars and thumping drum, but those things are as much a tease as the call of a siren, because ultimately this is still an exhibition in aural bedlam. As the bright guitar tones pierce your eardrums, Kesselring’s vocals, which are buried in a shallow grave of reverb and fuzz, are nearly lost in the maelstrom as he counts us down, “10…9…8…7...,” to some space aged launch into pandemonium.

“Babalon” is a sort of pop-punk explosion with its bratty sing-along of “la…la…la…la…la” underneath a wall of furious noise that sounds like its being played through a blown subwoofer. “Wanderlust” on the other hand is ethereal…contemplative…eerie. Here Kesselring employs a theremin to create waves of electronic noise amidst an introspective guitar, a sound that manages to evoke a sense of sadness…desolation. When the dust settles, this could be the soundtrack to the end. “Ever So Slowly” does nothing to brighten the mood with its subtly strummed guitar and vocals that sound submerged in an ocean of sorrow. On this one, Kesselring mesmerizes with a hypnotic display of guitar loops and effects.

Finally the sun rises on Western Lands with “Jack the Rocketman”, a song that tries awfully hard to be a traditional, up-tempo rocker, but maintains just enough distortion and resonance to salvage Comets Ov Cupid’s lo-fi integrity. “Raven Makes the World” on the other hand is the only song in which Kesselring comes up for air from beneath his sea of noise. It is essentially five minutes of captivating acoustic guitar that brings to mind images of a bleak expanse…a windblown wasteland…nothingness…solitude.

The title track features a wave of feedback and lightning fast guitar that ultimately transitions into the album’s heaviest riff. Here Kesselring plays over the backbone of a driving drum beat and of course layers the entire ensemble under a bed of static and fuzz. And that brings us to Comets Ov Cupid’s finale…“Moonshot”. The song is nothing if not a lullaby, a mellow oeuvre that seems to want to gently cast us out…usher us away…or perhaps even lay us down to sleep after experiencing the cacophony that preceded it.

You can call this project a lot of things. You can call it ambient…you can call it shoegaze…hell, you can call it noise if you want to. The question is…is this noise as art…or is it art as noise? Go on…check it out…judge for yourself…see what the commotion is all about.