CAST IRON CROW is today's "NEW BAND TO BURN ONE TO"  Morning Buzz... 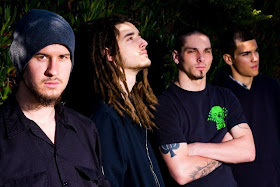 How does shattering your collar bone twice impact your musical career if you're a guitarist? For most this would be the end. For Jake Navarra singer of Cast Iron Crow it was one of the best things that happened to him.

Cast Iron Crow is a four piece grunge / alt metal Bay Area band that channels the sounds of their childhood. When Alice in Chains released their debut record "Facelift" in Aug of 1990, Cast Iron Crow held an average age of less than a year old. However, their early exposure to Grunge has perhaps lent itself to giving their music an effortless authenticity.

The band's sound transports the listener to a time, when MTV and the radio airwaves were dominated by the relevant and timeless music that the grunge era provided. Having consumed and digested the best rock music had to offer in the last 20 years, Cast Iron Crow has the benefit of a perspective that allows them to tastefully blend elements of their favorite sub genres of the 90's and on. A cup of Alice in Chains a pinch of Soundgarden a dash of Tool a sprinkle of a Perfect Circle... is that a hint of Motorhead?

To quote Henry Rollins "Scar tissue is stronger than regular tissue. Realize the strength, move on." After suffering his second broken collar bone in 2009, Jake was forced to quit guitar and thought his musical career might come to an end. Undeterred, he took up singing and was surprised at how naturally it came. Shortly thereafter Jake teamed up with lifelong musical co-conspirators Sam Gouveia (guitar), Joey Evans (bass), Ryan Long (drums) to form Cast Iron Crow.

Out of the gate the band marveled their native East Bay community with a surge of successful shows and by destroying a Bay Area battle of the bands competition. Praise by Tim Sult of "Clutch", Eddie Hernandez of "All Shall Parish", and a mass of new fans further propelled the band to record their debut full length record "First Edition" at legendary San Francisco institution Hyde St. Studios.

"Heavily influenced by 90's grunge acts such as Alice in Chains and Soundgarden, California band Cast Iron Crow bleeds new life into an otherwise forgotten genre. Infusing heavy-ass riffs, down-trodden rhythms and machismo vocals, this band will certainly make an imprint in your brain. Check out the two songs the band has generously offered for free download."

FREE DOWNLOADS: Beyond the Brain|Brother