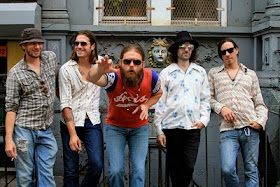 Heavy Planet recently caught up with up-and-comers Memphis Crawl. Their EP Falling Down Against the Sun is energetic, nostalgic, fresh, and a rollicking good time. A reputation as a can't-miss live act has garnered them some much-earned attention as well. Describing their sound is as difficult as pissing into the wind, though it's safe to point out the perfect balance of the fresh and the familiar. Rather than doing the band a disservice and stuttering through an analysis of the stunning four tracks on the EP, I decided to let them do the talking. Probably a smart move...

HP: I'm digging the new EP, fellas. Tell me about the recording process for Falling Down Against the Sun.

MC: "WELL WE WENT INTO THE STUDIO WITH A TON OF MATERIAL-WE NARROWED IT DOWN TO THE 4 SONGS THAT ARE ON THE EP-WE FELT THEY REPRESENTED THE DIVERSITY OF OUR SOUND. AS FAR AS THE ACTUAL RECORDING, IT WAS A REALLY FUN PROCESS. I THINK WE REALLY WORK GREAT TOGETHER IN THE STUDIO AND EVERYONE BRINGS DIFFERENT IDEAS TO THE TABLE"

HP: You guys are from New York City, but your sound certainly doesn't pin you to NYC. Who came up with the name Memphis Crawl? Is there an insidious story behind the name?

MC: "I CAME UP WITH NAME (MATTY O'BRIEN) BASICALLY MEMPHIS IS WHERE ALL OF THE GREAT ROCK N' ROLL FIRST STARTED-I CAN TRACE ANY KIND OF CONTEMPORARY MUSIC BACK TO MEMPHIS"

HP: Memphis Crawl seamlessly moves from loud, balls-out rollicking to gentler, moodier grooves. How do these transitions carry out live? What can ticket-holders expect to see at a Memphis Crawl show?

MC: "YEAH WE LOVE THE DIVERSITY AND THE DIFFERENT VIBE AND MOODS-OUR LIVE SHOWS ARE WILD, MAN. IT'S AN EXCHANGE WITH THE AUDIENCE. I THINK WE'RE ALL ADDICTED TO THE ENERGY OF THE LIVE SHOWS. I LIKE TO CALL IT THE CHURCH OF ROCK N' ROLL AND I'M THE PREACHER MAN."

HP: Haha, nice! The band's sound certainly takes back listeners to an age when music was more raw and organic than much of today's sound plagued with overproduction. Just when the listener spends two seconds thinking "these guys kinda sound like someone," they immediately question themselves when they hear the next lyric, chord, or sequence. Who are some of Memphis Crawl's influences that might surprise fans?

MC: "WE HAVE A TON OF VERY DIVERSE INFLUENCES-BUT A FEW THAT I THINK WOULD SHOCK FANS WOULD HAVE TO BE SOMEBODY LIKE RITCHIE HAVENS OR CROSBY, STILLS AND NASH. WE REALLY JUST LISTEN TO MUSIC THAT MOVES US, THAT'S THE ONLY PREREQUISITE"

HP: As it should be! Subquestion: Despite the raw and organic nature of these tracks, the musicianship of each individual member is evident on every track. The band sounds so unified while also allowing each band member to contribute and grab the bull by the balls. What's the dynamic between you guys?

MC: "THE DYNAMIC ONSTAGE IS GREAT. OFF-STAGE EVERYONE IS VERY DIFFERENT, BUT I THINK THAT'S WHAT MAKES THE MUSIC INTERESTING - WE ALL BRING DIFFERENT ELEMENTS TO THE BAND"

HP: Some of the songs from Falling Down Against the Sun seem to be about a real person. Wildflower Annie is the obvious example, but lyrics like "Do you remember when we used to go out walkin'?" sound painful and personal. How much do the band members' personal experiences play into what comes through in the music?

MC: "WELL AS FAR AS THE LYRICS GO, I AM THE ONE AND ONLY WRITER IN MEMPHIS CRAWL. MY PERSONAL EXPERIENCES ARE A HUGE SOURCE OF INSPIRATION. WITH ALL THE DIFFERENT EMOTIONS AND SITUATIONS THAT A PERSON GOES THROUGH IN LIFE THERE ARE ALWAYS LYRICS THAT CAN BE PULLED OUT. I THINK THAT'S WHAT MAKES OUR MUSIC REAL AND HONEST. ALL OF THE SONGS ARE A SOUNDTRACK TO OUR LIVES.

What advice can you guys give to young, upstart musicians hoping to make some noise?

HP: You guys have a reputation for putting on one hell of a live show. When can fans from the Midwest (personally, I'm stuck in Northern Illinois with little hope for great live music) hope to get a taste?

MC: "HOPEFULLY WE'LL BE VISITING THE MIDWEST IN 2012. YOU'LL BE THE FIRST TO KNOW. CAN WE CRASH ON YOUR FLOOR?"

HP: Hell yes, my wife and kids can get a hotel! Falling Down Against the Sun is giving listeners one blazing taste of Memphis Crawl's sound. Can fans be optimistic about a full-length album any time soon?

MC: "YES WE'RE STARTING WORK ON OUR FULL LENGTH IN EARLY 2012. WE'RE VERY EXCITED. WE WONT LET YOU DOWN, TRUST ME. IT'S GOING TO WAIL!"

HP: Alright, let's pretend you guys play a killer show and I feel like buying a round of drinks. Who's drinkin' what?

MAD FREIK-IS MORE INTO VEGETABLES IF YOU CATCH MY DRIFT

HP: Thanks for doing my job for me, fellas! We're looking forward to a full-length and any live shows within a stone's throw! And congrats on a smokin' EP!