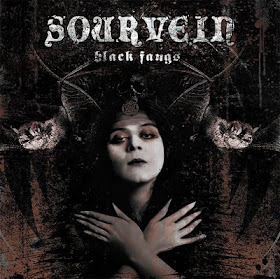 Today's featured Sunday Sludge is Sourvein's long-awaited full-length Black Fangs. Normally I reserve Sunday breakfast for coffee, eggs, ibuprofen, and a thick slab of chewy grime tickling my itching ears. Black Fangs may not suit a sunrise, so I'll suggest listening to this album at night. Oh, and listen to this album at high volume.

Don't say Sourvein didn't warn you. Fangs delivers 30 seconds of red-flag feedback while drums mock your creeping paranoia. The atmosphere is spooky, the vocals are naked and distant, and the groove shuffles from murky to swampy to downright squalid. The follow-up, Society's Blood, merges plodding doom and chainsaw gristle as drums slap clean up high and sucker-punch the listener's underbelly.

Things grow even more uncanny on Nighteyes, attacking from both speakers with King James's sharp guitars and building to a château scuttle from witches and hounds. You'll look around, frightened, until sounds fall steady. The song remains violent, though, and the bass pulse leaves dregs caked in your hair.

No Sunday Sludge column is complete or effective without a march through sogginess. Holy Transfusion's bass is a prominent chokehold drowning, making you wish you'd packed up your tent and gone the fuck home. Stutter-steps on bass hold their own against relentless drumwork, though the low-end seems to keep asking and answering its own question over and over again. But isn't that a sufficient definition for insanity? Advice from a bearded balcony lingers as the track fades, though this bass fights and never lets go.

Sourvein stay sticky on tracks like Fluxx... and Gemini, where drums are lambasted and T-Roy sounds as though he needs help crawling from a basement where demise awaits (Fluxx... could have played at the end of The Blair Witch Project, if you ask me). The howl balances the groove, and the claw hammer to the back of the head should have been expected by this point.

And who says sludge bands can't lighten up once in a while? Gasp and Nomadic pick up the tempo and smash mailboxes with enough angst to actually justify it if they get caught. These tracks have a sort-of "escape" feel to them, though you'll quickly realize it's nothing more than terror running toward you a little faster. After all, both tracks do seem to end with you being carried into a peat bog against your will.

The band's ingenuity and instrument-command are evident on Bleeding Charm. Guitars fuzz, drums slap, and the vocals hang outside your apartment window. The sounds blend perfectly to form a pipeline to Nocturnal/Negative Phaze, which carries an axe on its shoulder as it angrily stomps through your campsite. Don't worry, this warbling, grinding, staggering figure is simply looking to climb into a hollow tree just in time to hibernate through winter. The eerie finish blends every element the band bleeds, resulting in a guitar-hover denouement fitting of Dario Argento's Giallo.

You're not getting any history or band bio here; we already covered that. What you ARE getting is thick, wet, despondent gloom delivered by seasoned sludge agents. These guys know what they're doing, and eight years between albums is no reason to ignore Black Fangs. It might make you feel better to withdraw and come back after you've studied Sourvein's index. That's okay. Just keep in mind it's still being written, and these imperial bastards don't show any signs of hitting the brakes.