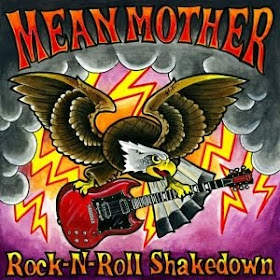 The next time you kids decide you wanna break into dad's liquor buffet, snatch a bottle o' cheap bourbon, and party in the back of a pickup parked in a muddy cornfield, you may wanna bring along a copy of Rock-N-Roll Shakedown. Mean Mother have managed to throw together one hell of a scummy southern-rock record, straight outta hell by way of Detroit's armpit. The band's sound is described as having "boogie that's more infectious than a truck stop shitter and twice as dirty."


The album's lead-off track, Rock-N-Roll Shakedown, spent three seconds worrying me Mean Mother were some incarnation of The Darkness, though the listener is quickly slugged in the face and advised you won't find Roxy Vega acting like a Freddie Mercury-wannabe dancing in leotards. You'll also get the impression these four Motor City natives haven't burned up their olfactions with mountains of coke; they've simply spent years slamming a few cold ones. Mean Mother wanna show you a good time, and they wanna see your fists pumping.

This album smacks your ass with strong southern riffs and classic rock howls, but the basslines are what drive the band's sound. In Kill For The Thrill, Clint Debone drops his purr, slows down his groove, and steadily steals the show from upchucked riffs that would make Dimebag Darrell raise his Crown Royal in toast. Persistent drums pair well with extended solos, building to a solid fadeout before Easy Livin' splashes Old Milwaukee in your eyes and rolls with the ghost of Skynyrd's That Smell. The band's vocals entwine excellently on this track, 'cause no southern-rock stud's leavin' his buddies behind.

Strange Appetite is the album's Buffalo Trace bearhug, with a bass-heavy roller-coaster groove bubbling under steady, chewy riffs. The bridgework is beyond solid, rollicking and honest, throwing in witches' coven howls to screw complacency and embrace the wolf's attack. N.H. taps the brakes and almost throws your GTO in neutral long enough for the smoke to clear, though pounding chops and thumps ultimately absorb you into a high-speed, solo-kissed desert romp. Guitar necks are battered on this disc, employing countless solos and snarling on more frets than I knew existed. Paint The Town Red ends the album like your red-bearded, out-of-work uncle ends every day: punching holes in walls and barking at the neighbors. There's fuzz, there's a jam, there's rust on your bumper.

Mean Mother have one hand on the stick-shift while the other crushes an empty PBR. The sound is familiar without being derivative, while the atmosphere is clouded with smoke and cheap booze. There's a bit of swamp, a few odd time signatures, and a whole lot o' groove. What's unsettling is that these studio cuts will likely never do justice for a band like this. I'd love to walk into a steamy watering hole, order a can of swill for each of my two hands, and watch Mean Mother ignite a rowdy local crowd as they forget the pretense of today's rock scene and just hit the gas.