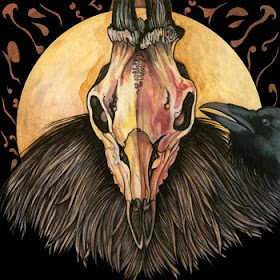 Picture Slim Pickens as “Major Kong” riding a nuclear bomb in Stanley Kubrick’s 1964 hilarious black satire Dr. Strangelove, and you’ll wonder why this band chose to name themselves after him. Orogenesis is a four-track collection of heavy stoner jams reminiscent of Sleep, full of effective bass-laden groove, and absent of any true vocals. The sound is honest, organic, and heavier than your best friend’s little sister. Three members of Fifty Foot Woman compose Major Kong, and here they give us four gloomy stompers without complicating the sound by adding extraneous elements.

Witches on My Land initiates the album’s persistent feedback fuzz, accompanied by troubling audio samples, clanking chains, perhaps even a sigh of falling ice. Strong stoner riffs break the tension and give way to dropped rhythm balanced by Pawel’s steady cymbals. The groove is infectious and you'll bob your head solidly as spacey guitar warbles through a soaring, deliberate solo. The sludge/doom groove stays in place long enough to let listeners know these Polish instrumentalists have enough experience to avoid rushing things.

The slow-building fade-in of In for the Kong! reeks of patience and promise, delivering a groovy buzz once the riffs fall in. A few strategic jagged hooks pepper Michal’s sawmill guitar drone, only to ultimately space out into a hum-drive that again slams your eardrums off their asses.

The stand-out track is Swamp Altar, which transcends genres and finds parity between drudge and twang. The swampy, southern licks ride sidecar to the fuzzy bass, while the drums could fill an empty cave in the Ozarks. The honkey-tonk never disconnects the listener from the heavy, grinding pace, even when the riffs break into another extended, quavering solo. These three guys play together brilliantly and seem to share one vision when crafting every sound on this disc. Don't bother looking in the classifieds, they don't seem to need a vocalist.

Major Kong provides the listener with a quick study of instrumental doom created by accomplished and seasoned musicians. The album will only chew up twenty-four minutes of your wake and bake, so you may just have to listen twice. At least until we hear more from these three. I'm not sure I can wait much longer.