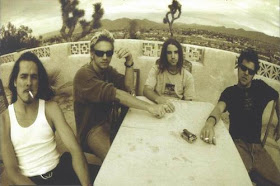 Before I get started with this week’s edition of Flashback Friday, you need to understand something about me. I happen to think that the sub-genres we refer to as “stoner rock” and/or “desert rock” were not only influenced by…but flat out invented by the legendary Kyuss. Furthermore, it is my opinion that no one has yet managed to match the intensity and more importantly, the ingenuity of the four albums released by that band during their brief existence in the early 90's (despite some admittedly amazing attempts by a number of acts throughout the years). It goes without saying then, that I’m also a big fan of all the post-Kyuss projects that spawned from the band’s breakup. Which brings me to this week’s Flashback Friday, which you’ll notice is a little different than usual, as it focuses on...not one...but two bands from yesteryear. The common thread? Both were fronted by former Kyuss vocalist John Garcia following the breakup. Enjoy!

Now Kyuss was known for a lot of things, not the least of which was their heavy, fuzzed-out jams. But another trademark of their sound was the pseudo laid back, yet gruffly masculine rasp of Mr. Garcia. So it should come as no surprise that just months after the Kyuss breakup, the vocalist managed to pull together three like-minded musicians, Chris Hale (guitar), Damon Garrison (bass) and Brady Houghton (drums) to continue making music in the same vein as his former band.

Appropriately dubbing themselves Slo Burn (it doesn’t get much more stoner than that), the new band quickly pulled together a five song demo that ultimately led to the 1997 EP Amusing the Amazing. The four tracks took the colossal riffs and rhythms of Kyuss and stripped away the expansive, meandering jams, resulting in a straight forward, no-frills dose of heavy stoner rock. The EP received overwhelmingly positive press, particularly from fans of Garcia’s previous band, who by then were in utter withdrawal for their desert rock fix. Later that same year, Slo Burn was invited to play the second stage of what was, at the time, a blossoming annual summer event…the metal extravaganza Ozzfest. Unfortunately, that would be the band’s only glimpse of success as they abruptly called it quits almost as quickly as they’d started. 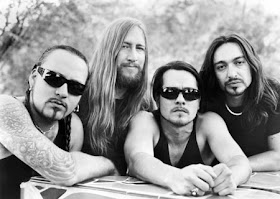 Not one to rest on his laurels, John Garcia immediately got back to work, this time with Arthur Seay on guitar, Miguel Cancino on drums and Dave Dinsmore on bass and in 1999 released a split EP with the Swedish band Dozer, under the name Unida. The EP featured four songs from both bands, the Unida portion of which was titled The Best of Wayne-Gro EP. The sound was unmistakably stoner rock, and somewhat of an extension of Garcia’s Slo Burn project. Later that same year, Unida returned to the studio and recorded their debut full length Coping with the Urban Coyote. The album was (and still is) a collection of some of the most thunderous songs in John Garcia’s impressive repertoire. It is filled with the groove and emotion you should expect from anything with the man’s name attached to it, but keeps that chill vibe that just says “hey man…have a beer”. This is essential stoner rock.

Scott Reeder (ex-Kyuss) would eventually replace Dinsmore on bass for the recording of Unida’s second album The Great Divide, which was scheduled to be released in 2001. Unfortunately record label shakeups would prevent the album from ever seeing the light of day (a common occurrence if you’ve been following along with past Flashback Friday write-ups). The band toured occasionally, with Slipknot’s Paul Gray (R.I.P.) famously filling in on bass in 2003, and Eddie Plascencia filling in on a more permanent basis, but no other albums were ever released and the band remains on hiatus.

The remaining members of Unida, Arthur Seay, Miguel Cancino and Eddie Plascencia went on to form the band House of Broken Promises and released their debut album Using the Useless on Small Stone Records in 2009. John Garcia can now be heard as the vocalist of another stoner rock band, Hermano, a project he’s been involved with since its inception in 1998. To date, the band has released three studio albums and a live album. Garcia was also rumored to have worked on a solo project he’s appropriately labeled Garcia vs. Garcia...so far no recordings have been made available.

And of course the latest buzz on Garcia started in 2010, when he put together a backing band and toured Europe under the guise “John Garcia plays Kyuss”. This led to a now famous set at Hellfest in Clisson, France where the vocalist was joined onstage by former bandmates Nick Oliveri and Brant Bjork to perform the classic Kyuss cuts “Green Machine” and “Gardenia”. Then in November 2010 the three band members announced their plans for a full-on Kyuss reunion (sans Josh Homme) under the name Kyuss Lives!. A new record and more touring are supposedly in the works. One thing is for sure, if John Garcia is involved…that shit will be epic.

That’s your weekly Flashback Friday my friends…you know what to do now…pop open a beer, chill the fuck out and check out some classic stoner rock from Slo Burn and Unida…cheers!