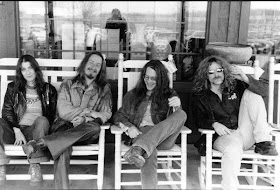 Back in the early 80's, New York City's music scene was being overrun by a slew of new wave and punk bands, all eager to replicate one another's style in some form or another. There was one band over on the lower East side however, that was blending the genres of Southern rock, punk and metal to create their own unique sound. That band's self described "boogie rock" would propel them to the heights of major label record deals, MTV airplay and a Guitar World magazine piece that would famously describe them as "Lynyrd Skynyrd meets Metallica". That band was Raging Slab.

It all started when Greg Strzempka (vocals/guitar) moved to New York from Washington D.C. and hooked up with slide guitarist Elyse Steinman. Combining their mutual love of punk and 70's styled classic rock, the two immediately began recruiting additional musicians to fill out their new band. In addition to Strzempka and Steinman, the first version of Raging Slab featured Dimitri Brill (guitar), who would later DJ for the dance band Deee-Lite and Kory Clarke (drums), who would go on to form another seminal NYC band, Warrior Soul.

This version of the band would not last long however as both Brill and Clarke would leave to pursue their other music projects. And after a series of lineup changes, Raging Slab would eventually ditch the three guitar attack in favor of two six strings and a bass, played by newcomer Alec Morton. Tim Finefrock took over on drums, however as you'll see, this was a position that would see a good deal of instability for the band throughout their history.

Finally, in 1987, Raging Slab released their debut album, Assmaster on the New Jersey based label Buy Our Records. This collection of songs was a perfect representation of the band's ability to combine mega riffs with Southern rock swagger and 70's soul. And besides the great tunes, the original pressing came with a comic book about the adventures of the album's namesake, penned by a couple of artists from Marvel Comics (how would you like to get your hands on one of those?). Strzempka and company kept the momentum alive by releasing a followup EP titled True Death in 1988 (with Kenny Kness now on drums). Both Assmaster and True Death would be packaged together and re-released in the early 90's under the name Slabbage.

The buzz around the band was beginning to pick up and by late 1988, RCA Records had stepped in and asked them to record a demo. Upon hearing the first few tracks however, the major label quickly signed on for the band to record a true LP. The result was Raging Slab's classic self titled album. For this one, the band added Mark Middleton to the mix on guitar (their second foray into three guitar territory) with drums being handled in part by T.J. Scaglione (formerly of Slayer) and Steve Wacholz (formerly of Savatage). The album was a huge commercial success due in part to the video for the song "Don't Dog Me" which MTV had placed in heavy rotation. This led to subsequent tours with a diverse group of acts including the Ramones, the Red Hot Chili Peppers, Molly Hatchet and even the 80's hair band Warrant. Bob Pantella, who would later play with Monster Magnet, played drums on the tour.

In 1990, when it came time for Raging Slab to record their next album, they decided to build their own workspace in rural Pennsylvania (where Strzempka was originally from), aptly naming it Slabby Road studio. With yet another drummer in tow (The Misfits' Brain "Damage" Keats), the band got to work on the record, which they'd dubbed From a Southern Space. Unfortunately when the album was finished, RCA didn't like what they heard and subsequently refused to release it. To let off steam and perhaps give a big fat middle finger to their record label, the Slab took their act back on the road, ultimately scoring a primo opening slot for Guns n' Roses.

Eventually, the band re-entered the studio (this time with Jack Irons of Chili Peppers/Pearl Jam fame on drums) to record an album more to RCA Records' liking. To their dismay, the result, Freeburden, did nothing to change the label's impression and it too was shelved. Needless to say, the band was devastated. Fortunately, uber-producer Rick Rubin disagreed with RCA's assessment and proceeded to buy out the remainder of Raging Slab's contract, bringing them over to the ever growing roster of his Def Jam record label.

Raging Slab quickly got to work on yet another album, this time enlisting producer Brendan O'Brien (Soundgarden, Pearl Jam, Stone Temple Pilots) along with string arrangements courtesy of former Led Zeppelin (and current Them Crooked Vultures) bassist John Paul Jones. The result was the 1993 masterpiece Dynamite Monster Boogie Concert, a true testament to Strzempka's songwriting ability, to the band's resilience and to their absolute ass kicking rock n roll. And although that album didn't sell nearly as well as their self titled, it did manage to spawn another hit video on MTV, earning praises from even the channel's biggest critics…Beavis and Butthead.

After a tour through Europe (with another drummer…Paul Sheehan) and more high profile Stateside shows with Monster Magnet and Lenny Kravitz, Raging Slab readied themselves to record their followup for Def Jam (which had become Def American by that time). In 1995, the band was all set to release Black Belt in Boogie, when…to their surprise, Rubin of all people pulled an RCA and refused to release it. Disheartened and frustrated, Mark Middleton quit the band. The rest of Raging Slab pulled up their bootstraps and went back into the studio to try yet again. Sing Monkey, Sing! was the result and the frustration could be heard throughout its thirteen tracks, which were hindered by poor production and unmemorable songs.

At that point, Rubin essentially cut ties with the band. However, due to contractual obligations, Raging Slab was unable to release material on any other label until 2000…their hands were tied. In the meantime, they played live shows and began recording songs for what would eventually be their next album…and of course, their rotation of drummers continued, first with Phil Ondich (who would leave to join Black Label Society), then with Dale Crover (from the Melvins) and finally with Rob Cournoyer (who was recommended by Warren Haynes of Allman Brothers/Gov't Mule fame).

Then in 2001, Raging Slab signed on with New York City stoner label Tee Pee Records and released The Dealer. The album was a proper return to their "boogie rock" form and it harkened back to their old school Assmaster days. But the band's luck had not changed as their planned European tour to support the album had to be postponed due to their flight out of the States being scheduled on…of all days, September 11, 2001.

Raging Slab recorded one more album for Tee Pee Records, the title of which goes a long way towards relaying the frustration experienced throughout their music career…Raging Slab (Pronounced 'Eat Shit'). The band did make it over to Europe to tour for this one, but it would ultimately prove to be their last. Strzempka went on to join members of Swedish stoner rockers Backdraft in the band Odin Grange. And in 2004, he, Elyse Steinman and Backdraft drummer Niklas Matsson and bassist Mats Rydström joined together for a U.S. tour as Raging Slab, but no new music has seen the light of day.

If you haven't done so already, I encourage you to check out this unique, genre-blending band. To take nothing away from the current crop of 70's worshipping, throwback bands who are tearing it up today, Raging Slab was doing that shit about 25 years ago. Their mix of classic Southern rock and punk attitude has certainly stood the test of time. So here's what I want you to do…I want you to crank up your damn speakers, throw on some Slab and go get your boogie rock on!