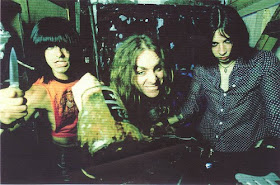 What happens when a couple of punk rockers decide they’d rather play Black Sabbath instead of Black Flag? Well, if you want the answer to that question, then look no further. Chrome Locust was a short lived project made up of old school punks who decided, at least for one album, that sludgy stoner rock was their true calling.

This brief story begins back in 1997 when New York punk band D Generation was in the midst of a vicious touring cycle for their second album No Lunch. Having just finished supporting runs with an array of impressive headliners including the likes of Social Distortion, the Ramones and even KISS, guitarist Richard Bacchus abruptly quit the band. With an opening slot on the Green Day tour in the works, D Generation had no time to waste in seeking out his replacement. Fortunately, they landed Todd Youth, a veteran guitar player who had already earned his stripes playing in legendary hardcore bands Murphy’s Law and Agnostic Front, and they never missed a beat.

This version of D Generation would go on to record their third and final album Through the Darkness in 1999. But more importantly for this story, is the musical collaboration that arose from that final lineup. Around the time that the album was being recorded, drummer Michael Wildwood and newcomer Youth had discovered a mutual affinity for the slower, heavier sounds of stoner rock. The two got together to jam with Youth on vocals and guitar and Wildwood on drums and ultimately they began writing songs. Interestingly enough, the third piece of the puzzle, bassist Jim Heneghan, would come by way of a band called Vasquez, whose singer/guitarist was none other than Richard Bacchus (the guy that Youth had replaced in D Generation). And in the aftermath of D Generation’s eventual demise, Chrome Locust was born.

The band released their debut, self titled album in 1999 on Tee Pee Records and it was exactly what you might expect from a bunch of punk vets playing Sabbath inspired tunes. Slow and heavy in all the right places…abrasive and fast in all the others…the record was a true underground classic. Unfortunately it would be the first and last we would hear from Chrome Locust as Todd Youth would leave later that same year to take a more high profile gig as the guitarist in Danzig. And in an interesting, yet unrelated twist…Michael Wildwood would go on to play drums for space rock legends Monster Magnet on their 2004 album Monolithic Baby!. Thankfully, unlike a lot of my Flashback Friday recommendations, the Chrome Locust album can still be found relatively easily. As always, I strongly recommend that you check out this excellent band whose career was all too brief...take a listen and see for yourself what it is to be a “sludge punk”.