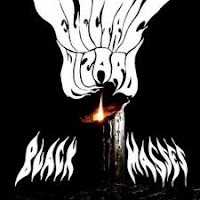 Down and dirty stoner/doom metal, the way it should be. Now I've never been a huge Electric Wizard fan, the couple of albums I have heard haven't impressed me too much, but Black Masses is something different. The only other releases I have heard from the group are their self-titled debut, and their EP/single Chrono.naut, and while I found Electric Wizard (album) to be alright, I did not like Chrono.naut, and I guess I've never really gone back to give them another shot. I think now I may have to now. Anyway, Black Masses has made it on every person's (just about) Top of 2010 list, and although I don't see that being a case for me (who knows, I haven't finished the album completely yet), it mill definitely be an Honorable Mention of some kind. While the music is great - it is doom metal with constantly fuzz-driven guitars - the songs themselves tend to become  very difficult to distinguish one from the other. The first four songs of the album all sound pretty damn similar, and if there wasn't a slight quiet bit between the songs I would have no clue where one begins and another ends. The fifth track "Satyr IX" was the first songs to mix it up; so sound like something different, which then when it returned to the previous style song, "Turn Off Your Mind," it sounded a bit more fresh. This is a minor gripe, as all of the songs do make me want to crawl into a whole and die (as any good doom metal should), I just like some variety, which is why songs like "Satyr IX" will stand out in my memory. Again a great album, nearly every song on it is something I could rock out to repeatedly. I would just like a little more variance (even a little change is doom is noticeable) in the song styles. Once the new year starts I'll have some free time to go back and listen to all of the great acts I have missed, Electric Wizard will be one of them.