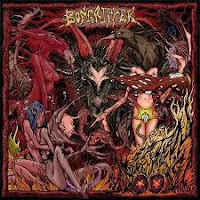 Another group, in the long line, that I probably am not the best person to review their album. Bongripper is an instrumental sludge band (I don't know how you can really call it sludge without any lyrics, but whatever), who falls into the same problems as most instrumental acts: dull songs. For Satan Worshiping Doom, the group decided to only include four tracks for a fifty-three minute album; so as you can guess the songs are long. This is actually a step up from their norm, with every previous album aside one (Hippie Killer) being one, hour-plus, song - sometimes broken up into several parts, sometimes not. So I guess I really shouldn't complain about the song length, but honestly I don't know how (without drugs) people can listen to the same droning sound or melody repeatedly for almost fifteen minutes (this goes for anything atmospheric or drone-doom as well). Satan Worshiping Doom appeared on several people's 'Best of' lists and I guess if you're a fan of the genre I could see why, but it wouldn't make the top 50 for me. I mean the music is decent, and as always there are good segments, but I can barely stand to listen to it all through once, let alone repeatedly over a year. As I said, I'm not the best review of music like this, because I am not a fan of the genre (imagine me reviewing death metal - ugh), but every now and then an instrumental group stands out (Sahara Surfers), and for that reason along, I search amongst the records.
[EDIT]: Ok, I wrote the above and then I actually finished the album. I have to say, it grew on me. Once I stopped trying to listen to it, and let it float to the back of my mind, it began to become enjoyable. I'm still not saying it's an instant classic or anywhere close to top 10, but my first impressions may have been a bit off base.