Mini-Review: Agalloch - Marrow of The Spirit

I've got a lot of quick reviews that I've done in the past month, and because they were in groups of five and some of the five weren't suitable for Heavy Planet, I've neglected to post them here. Now that I have some time, I am going to be writing this wrong and banging out a bunch of short album reviews of some past albums. 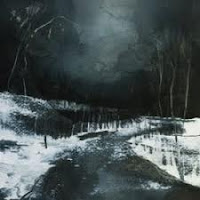 Hauntingly beautiful meets downright dark. Agalloch has always been a mystery to me. I love them, but they are unlike 99.9% of the other music I hear. I don't much care for black metal, the only groups I listen to being the 'classic' black (Mercyful Fate, King Diamond and Celtic Frost (in certain parts)), but for some reason Agalloch breaks through these barriers. I think it's because I see them more as folk metal, then true black metal. Their albums cross several genres, black, folk, progressive, symphonic, and post-metal have all been attributed to the group. It all fits. Marrow of The Spirit continues on the group's previous style; the songs are mixed with haunting beautiful strings and pianos, ear-shattering thrash, and wailing vocals. It's an experience that is difficult to accurately describe, it is something you will just have to try for yourself. The vocals don't take the main focus of the record, and I think that is another reason why I like Agalloch; they seem to be - at times - another instrument, adding to the layer of sound. The songs are all long, multi-layered and part pieces, with almost everyone changing styles throughout. It's hard to choose favorite tracks, as the songs sometimes fall onto the sword of most long songs; they have good segments, and some not-so-good segments, and while Marrow of The Spirit doesn't have this dragging effect too much, it is still there, taking away from the whole sound. This effect is seen more on the later songs, "Ghosts of the Midwinter Fires" and the final, "To Drown," with the last song, being an instrumental, effected the most. Other then this, there is no complaint. I love this group, and they fall way outside my normal comfort zone - but I always say every genre has a few good bands - and sometimes you need something like that. Go out, get Agalloch, all of the albums, and feel the experience of the group.