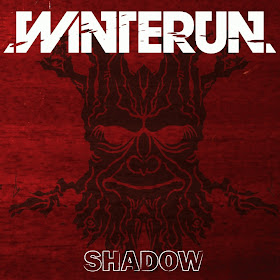 Winterun are a stoner rock outfit from Melbourne, Australia who have been slugging it out in the trenches of the independent music scene down under for over ten years. With this five song E.P., which is the band’s first release since 2007’s Into the Underground (and fourth overall), these Aussies are hoping to whet your appetite for their groove heavy tunes prior to the release of their next full length album, which is scheduled to drop later this year. If you’re familiar with the band, then you don’t need me to tell you how much ass they kick. But for those who have yet to be initiated, Shadow is the perfect introduction to Winterun, as it features three brand new tracks alongside two of the band’s older cuts that have been spit shined and given one hell of a blues-rock makeover.

The disc starts with “Tomahawk”, a riff heavy rocker with a significant Clutch vibe. The song is highlighted by the guitar playing of Guy Martin and it’s punctuated by the gravelly rasp of vocalist Nick Dunstan. The band uses dual guitars (Dunstan plays rhythm) to simultaneously create the heavy crunch that drives their sound while allowing the lead to come to the forefront of the songs, creating a level of depth that carries them beyond your typical “riff-rock” fare. The title track from Shadow is a perfect example of this, and it’s my personal favorite of this collection. “8 X 10”, the last of the three new songs, is yet another example of the band’s ability to combine groove and rhythm, thanks in part to drummer Joel Schneidruk and new bassist Matt Taylor with looser, free roaming guitar to create a sort of alt-stoner sound, kind of like a heavy ass version of Pearl Jam.

The final two tracks are remakes of "Sucker for Punishment" from the band's 2005 album Welcome To… and "Lighter" off their 2004 debut The Full Effect. The new versions of these songs feature the harmonica playing of Aaron Gillet, which completely transforms Winterun's sound into a bluesy, Southern rock explosion. As I described previously, Shadow is a sort of merging of the old and the new for these Australian stoner rock vets. The result is a quick, but altogether satisfying taste of Winterun and something to tide you over until the real deal arrives later in 2011.