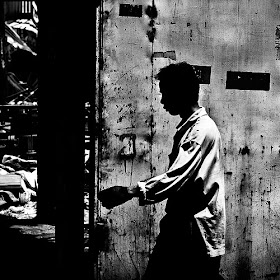 What you’re looking for will arrive…but it will get here on its own time, not on yours. The music of Pan Galactic Straw Boss, who if you’re wondering, takes their name from the writings of Kurt Vonnegut, is about timing, it is about taking a basic musical idea and tracing it from the humble beginning (perhaps a simple guitar chord) all the way to the final conclusion (a crushing, feedback laden jam). But more than anything else, the music of PGSB is about anticipation. On their first full length album Reverberator, this three-piece from Norfolk, Virginia have created one epic slab of noise that will simultaneously soothe, enlighten and ultimately crush your soul and it will do it by subtly drawing you in, making you wait for the climax and then pummeling you with it just when you least expect it.

Take the first track, “The Shape” for example. The song starts with a single guitar being gently strummed with pauses here and there allowing seconds of pure silence to creep into the mix. This bleak landscape of sound goes on for nearly three minutes, the effect of which is one of sheer loneliness. And just as you reach the point of exhaustion in your aural state of solitary confinement, a drum roll blasts forth and you’re hit with a deafening wall of feedback and a crash of cymbals that lasts for 60 seconds that feel like an eternity. At that point the drummer shifts into a solid beat and the bass rolls in to save the day with a head bobbing groove…but that guitar is relentless and the feedback continues…in fact by this point you’ll feel like it’s in the back of your head…like it’ll never go away. But then another couple of minutes go by and the whole thing does go away and you’re back to that beautiful, soothing guitar that started this…this opus. And you’re thankful for the peace…for the chance to breath…to contemplate what the fuck this is that you’re experiencing. But then two minutes later, the drums lift up again and this time the guitar isn’t just creating reverb, no this time there’s a solid riff and the whole ensemble is working together, creating a groove that would make most metal bands cower in the corner. And when you’ve finally succumbed to the fact that you have no idea where this ride will take you next, PGSB decide they’ve reached their conclusion, and the entire sound collapses in on itself and then it’s gone.

On ensuing tracks, PGSB manage to continue to draw the listener in with a near constant sense of anticipation oftentimes by way of using silence as an instrument. The band is not afraid to give the listener space to reflect on what they’re hearing and it does wonders for the overall piece of work. From the frenetic pace of “Dialogue between a Priest and a Dying Man” to the calm, Zen-like peacefulness of “Mouth Crazy”, the album flows together seamlessly.

“Have We Some Wrong? Done?” is a complete mind-fuck, as it opens with a sound bite from the controversial, yet classic fight between Sonny Liston and Cassius Clay (Muhammad Ali), which is interlaced with somber guitar playing that is repeatedly interrupted by jarring bouts of white noise and the bleeps and blurps of a public service announcement…somehow this song just disturbs me and I’m not sure exactly why…try wrapping your head around that. “Jane Toppan’s Lust Murders”, which may be my personal favorite off of Reverberator, sounds as though it could be the demented soundtrack to an old Clint Eastwood spaghetti western. And the album’s finale, “Silos”, is an eleven and a half minute epilogue that never breaks a sweat, and sees PGSB bringing their Drone masterpiece to a quiet and conclusive close.

Admittedly, this is not an album for everyone. It is intense, it is abstract and it requires a patient ear. But if you’re willing to take the time to listen to Reverberator (this is a perfect headphone album by the way), you’re in for a highly enlightening and altogether enjoyable experience. At times I wouldn’t even define this as music, but as an overall aural experience. PGSB do not write songs, they write soundscapes. This is noise as art…dig it.

Track Listing:
01 The Shape
02 Dialogue Between a Priest and a Dying Man
03 Mouth Crazy
04 Have We Some Wrong? Done?
05 Jane Toppan’s Lust Murders
06 Silos