Well, as you have anxiously been anticipating, here are my Top 5 albums of 2010. At this time I would also like to wish everyone a Happy New Year and look forward to hearing some great new music in the upcoming new year. 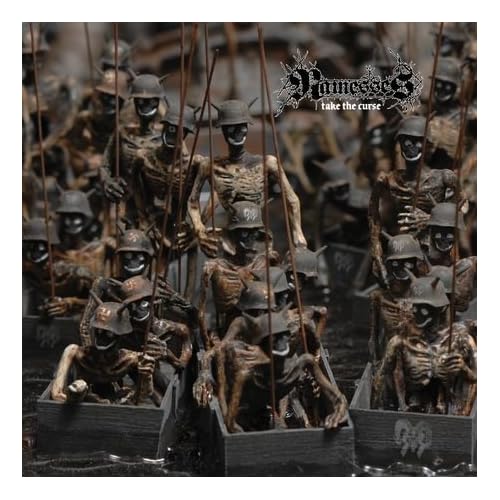 I couldn't wait for this album to come out, and after listening to it through the first time I had no doubt that it would be a perfect fit in my Top 10. Unfortunately, there were four other albums that hit me a bit harder than this fine release, otherwise it would have been ranked higher.

"Hailing from the darkest depths of Dorset and featuring the original Electric Wizard rhythm section, Ramesses don’t piss about when it comes to delivering weighty slabs of pure, malignant doom. Their second full-length, ‘Take The Curse’ is as dark and claustrophobic as they come, bursting at the seams with massive sludge riffs and enjoyably camp soundbites from 70s horror flicks. The production is appropriately dank and musty, adding an extra layer of unpleasantness to numbers like ‘Black Hash Mass’ and ‘Baptism Of The Walking Dead’, the latter sounding like an Autopsy record spinning at the wrong speed. Doom the fuck out."

"I first heard the tracks off "Take The Curse" almost a year ago now when a friend sent me their CDR promo that was circulating at the time, it was such a killer collection of songs that i lent out the disc to another so called friend and never saw the CD or that dude ever again! Finally after nearly a year of waiting i have the album back again and it was worth the wait. Released on the Ritual Productions label, it is due for a official release on April 19th. The CD comes in 2 alternative covers with glossy artwork and the first 200 copies comes with a exclusive limited edition collector's art card set, made especially for this release. What is remarkable about Ramesses is they have become a big influence to a lot of bands but have only ever released one previous full length album which was "Misanthropic Alchemy" released in 2007. They have released a couple of split albums with other bands and a couple of EP's including last years brilliant "Baptism of the Walking Dead". The power doom-trio have a originality that is hard to compare with anyone else which is the band's strongest point and on "Take The Curse", they have taken their sound to the next level of sonic extremes and accessibility." Read more... 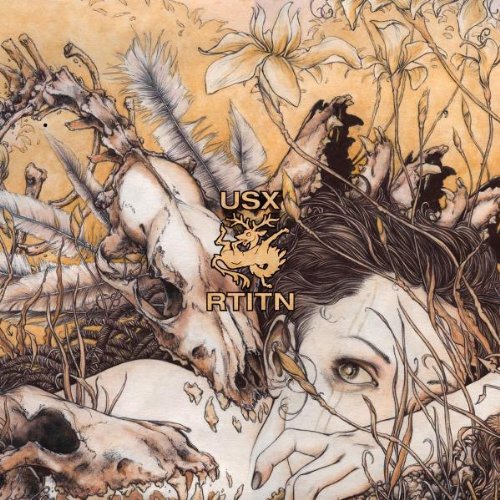 After the release of their brilliant 2008 release "Eat the Low Dogs", I did not believe that album could be surpassed. On "Run Thick In The Night", the band continues to explore the boundaries of music: dark, brooding, spacey, trippy, chilling or whatever you want to call it, USX simply puts out some truly phenomenal music. I think they just might be one of my new favorite bands!

"A few months ago one of my friends was hanging out at South By Southwest (you all know how I feel about that shit, my friend is lucky I still speak to him), and I made him promise me that he would check out U.S. Christmas. I think they were playing a Neurot showcase. I don’t remember. He sent me a text mid-way through their set saying that the band’s percussionist was frying on mushrooms, and that the band sounded incredible. For the first time in my life, I was actually jealous of somebody at SXSW. I guess there is a first for everything." Read more...

"Purveyors of Hawkwind and early Floyd should be interested in Run Thick In The Night, the new album from space/psych rockers US Christmas. It is their fifth release to date and the follow up to Eat The Low Dogs. US Christmas has been around for about ten years but I have to admit this is the first time I have come across the band's music. Band members include Nate Hall (words, voice, slide, electric and acoustic guitar), Matt Johnson (electric guitar, synthesizers), Meghan Mulhearn (violin, voice), Josh Holt (bass, drones, synthesizers), BJ Graves (drums, percussion), Justin Whitlow (drums, controlled feedback) and Chris Thomas (guitar, bass)." Read more... 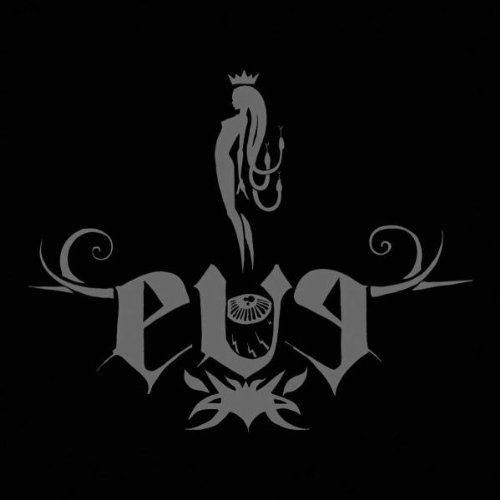 Usually I am not really into the critically aclaimed albums because frankly I just don't understand what all the hype is about but this album is worth all the hype. It is a tremendous result of how well an album can be constructed. If you have never heard anything by this band, Eve is a great place to start.

"“Ufomammut are gonna make a big splash with this album."

Seems like I’ve been saying that since 2004, when I first heard Snailking. But for whatever reason, these Italians still seem to be flying under the radar of most doom fans. Maybe it’s their peculiar moniker or the fact that you may have to search a bit to find their releases. But really, there’s no good reason that the doom faithful would miss out on a band capable of chest rattling riffery worthy of Electric Wizard, the hypnotic incantations of Om, and ensnaring ambient intensity of Neurosis and Isis. Of course, Ufomammut don’t actually sound like any of these bands. They don’t actually sound like ANY band. But the trio have honed their attack, forging their own lethal brand of psychedelic doom, and Eve may well be their finest hour." Read more...

"The line between art and entertainment is totally blurred with Eve, the sixth recording of Italian psyche-doomsters Ufomammut. This new offering is a slow burn and as such, it may require too much from the average listener to enjoy. Others, wiser, more patient and with more sophisticated taste will realize that even though this is best consumed in one sitting it may take several listens to discover and get engaged by the hidden grooves and the slow ascensions presented here. For most, Eve may be too artsy. Hence, not entertaining, nor rocking enough. For others, most already familiar with Ufomammut’s past works, this will be a trip worth ingesting and digesting." Read more... 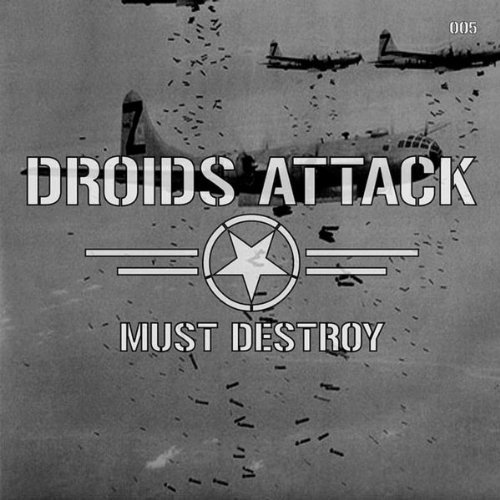 After the release of Droids Attack's previous effort Fatal/Error, I didn't think the band could get any better, man was I wrong. Although the band incorporates some pretty silly lyrics into their music, I could seriously care less. I just want to fuckin' rock, man and these guys do not hold anything back. This album cured my urge for some serious classic stoner rock riffage with a dash of punk thrown in for good measure.

"You’re not likely to get more bluesy riffs and swagger on any other album this year. Droids Attack have again pushed all the right buttons, when it comes to my love for big, classy riffs and Must Destroy will probably end up on my next, horribly disfigured “year end best of list” as a result of their groovy prowess."

"Life’s not fair, you know. While most bands spend all their years in existence trying to write one good song and a not so sizeable portion of others manage to do so and live off it, others, like Droids Attack, make it seem so easy and write whole albums of high quality chutzpah and high energy music. What’s more infuriating, they make it seem like a joke. A good joke. I mean, they have a song called "The Unforgiven 4" for chrissakes! Taking a look at the digipack you can tell these droids aren’t about getting deep and making you think sad thoughts. Yeah, they may be dressed as soldiers in the second world war but that robot mascot – named Robo – is beyond cute and apparently he is an enlisted stoner fanatic too" Read more... 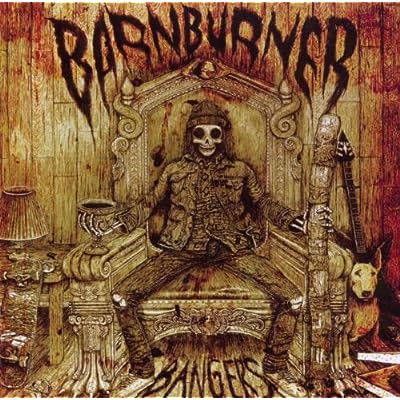 While not critically acclaimed, the album gained some pretty decent reviews. This album was one of the first releases of the year and I just couldn't get enough of it. It is just one of those albums that gets your blood flowing. The band deemed themselves “the 3 headed love child of Iron Maiden, Thin Lizzy and Fu Manchu“. A pretty accurate statement I must say. I also hear a little C.O.C. influence in there as well. After reading that statement I knew it would have to be great.

"Montreal, Canada-based 4-headed riff machine Barn Burner don’t believe in beating around the bush. Album opener ‘Holy Smokes’ comes roaring out of the gate with a direct aggressiveness that lays out the band’s stall in no uncertain terms – no atmospheric intro, no acoustic lead-in, hell, there’s not even a hi-hat four count – from the second you press play, you’re blasted by guitars, bass and drums in full hell-for-burnished-leather mode. Self-described as “the 3 headed love child of Iron Maiden, Thin Lizzy and Fu Manchu“, the band’s commitment to dirty, sleazy riffage mingled with a punkish rawness and a hard-partying attitude is undisputable. The fifth track, ‘Runnin Reds’, in particular sounds like it could slot neatly onto Black Flag‘s Damaged II album, while mid-album 6:38 epic ‘Brohemoth’ showcases a more thunderous, mid-paced side of the band’s musicianship, barrelling along on crashing, discordant riffage and downtuned stomp." Read more...

"It's easy to write a lot about a band that is bad, or a band that has lots of ups and downs, but for the acts that are solid throughout, unless you listen to the album repeatedly - enough to fully digest it's complexities - then it is damn difficult to make a decent article about it. Barn Burner is one of those acts. Their debut (I believe) album, Bangers, is a solid rendition of rockin' and groovin' stoner metal. They play the blues-tinged, funk-riddled style of the genre which is my favorite. Every song - while great - sounds similar to the one previous and the one after, there is no way to pick the stand-outs, no song falls behind either, all are of the same caliber, all of them rock!" Read more...