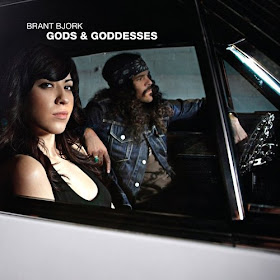 Since Reg is busy putting together his top 20 albums of 2010, I figured it would be a good idea for me to post a review of one of my favorite albums from this past year. I’m fairly certain that Brant Bjork needs no introduction to the readers here at Heavy Planet. His influence within the stoner rock community dates back to his time as drummer for the legendary Kyuss, through his stint with fuzz-kings Fu Manchu, all the way to Gods and Goddesses, the latest in what has become a very impressive catalogue of solo releases. Brant Bjork defines the genre plain and simple…hell, if you ask most people who know a thing or two about it, they’ll tell you he helped to invent the damn thing!

So with that said, it’s understandable that I had high hopes when I hit play on the latest Brant Bjork endeavor and boy was I surprised when those hopes were not only met, but even surpassed about midway through song number two. But wait…I don’t want to get ahead of myself. Gods and Goddesses starts with “Dirty Bird”, a nasty little blues-inflected ditty with a shit ton of swagger that finds Bjork crooning “I got a little somethin’, somethin’ for you…it won’t take but a minute or two”. Bjork’s vocals on the track have a raspy quality that brings to mind images of dimly lit nightclubs saturated in smoke and whisky and the song itself is a fantastic album opener. And then comes track number two…oh damn that track number two...this one might be the best song I’ve heard all fucking year. “The Future Rock (We Got It)” keeps the swagger factor at a 10 but this time the subtlety is gone…this time Brant’s shoving it right in your face. Featuring an amazingly catchy riff, a sing along chorus and one hell of a guitar solo, “The Future Rock (We Got It)” makes you want to speed down the highway with your windows down…even though it’s the middle of winter.

Gods and Goddesses continues with “Radio Mecca”, which is all sexy and funky and is Brant Bjork doing his best Hendrix impersonation…and it’s a damn good one! And on “Little World” Brant and his band (Billy Cordell - bass, Brandon Henderson – guitar and Giampaolo Farnedi – drums) get all space rock on your ass with the psyched out vocals and a spine tingling guitar solo that Dave Wyndorf wishes he wrote. “Blowin’ Up Shop” sets the tone with a nice Clutch-like groove, some reverb laced vocals and the lyric “you ain’t gonna stop my trip today”, which seems to define Brant Bjork. And speaking of Clutch, “Good Time Bonnie” is what it would sound like if the elephant riders themselves let Lenny Kravitz take a guest turn on vocals. And if “The Future Rock (We Got It)” is my favorite song on the record, then the funky bass line and playful guitar work of “Porto” easily make it my second fave. I could kick back with a few Coronas and just hit repeat on this one. In fact, if you look up “mellow” in the dictionary, this song might be what you’d find.

Gods and Goddesses closes with a track called “Somewhere Some Woman” and honest to God, it brings to mind Tom Petty and the Heartbreakers playing stoner rock. It’s like classic, Southern rock with a desert twist and sounds like nothing I’ve ever heard before. Brant Bjork is a musician whose legacy in music was put in place a long, long time ago, but with this album he’s raised the bar even higher. This is music with a soul and you can’t fuck with that…it’s dirty, sleazy desert rock n’ roll played by the dude that you don’t want to leave your girlfriend alone with at the party. While most of the music being churned out these days is of the PG-13 variety, there’s no doubt about the fact that Gods and Goddesses is rated R. C’mon…take a ride with this stranger…there’s room for you on Brant Bjork’s trip.