If you are into the whole psychedelic space-rock sort of thing, I suggest you direct all of your attention towards the band U.S. Christmas. After the release of their brilliant 2008 release "Eat the Low Dogs", I did not believe that album could be surpassed. On "Run Thick In The Night", the band continues to explore the boundaries of music: dark, brooding, spacey, trippy, chilling or whatever you want to call it, USX simply puts out some truly phenomenal music. I think they just might be one of my new favorite bands! 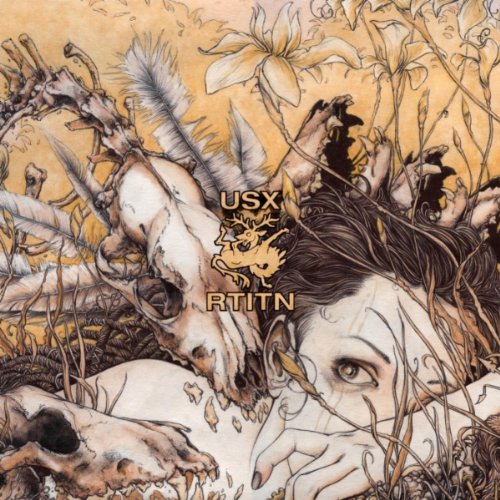 U.S. Christmas are one of those rare bands who can meld seemingly disparate elements together to form their own cohesive and distinct sound. Think Neil Young jamming with Hawkwind, Spacemen 3 and Pink Floyd, and you're in the right direction, but comparisons like those don't even give them their due credit. Bands like USX (as they're commonly referred to...) are more than the sum of their parts. Although the influences are distinct, they've got their own thing going on, and its fully righteous.

Their last album, Eat The Low Dogs, was hailed as a masterpiece, and Run Thick In The Night doesn't depart drastically on the sound they've already established. It begins with the moody, brooding 13 minute track "In The Night", with its heavily textured, wall of sound "outlaw country gone shoegaze" guitars and spacey keyboard sweeps, and morphs quickly into the Hawkwind inspired rager "Wolf On Anareta". "Fire Is Sleeping" is a tender ballad, really upping the ante on the Southern and Skynyrd influences without resorting to the usual cliches, and adds some weepy violin and mournful slide guitar to the mix. The next few songs continue in this s t y l e, country-tinged, acid drenched, and melancholy, until the bass and drum driven track "The Quena" breaks the spell and gives a much needed change of pace.

The rest of the album is more of the same, highlighted by the tremendous closer, "The Moon In Flesh And Bone." It's a well developed, well paced track with some spacey jams and killer guitar work throughout. It shows the band at their best and most elaborate, and provides a fitting close to the album.

The production is awesome. There's a lot going on in every track, and you can hear all of it, yet there's not always a ton of space and separation, so you get that melding of sounds when instruments occupy a bit of the same frequency and dynamic range, resulting in new sounds altogether. The effects are abundant, and yet tasteful and always serve to augment the overall sound rather than act as a novelty.

All in all, this is one I'm going to need to get on vinyl. At 77 minutes in length, it's a bit hard to digest in a single sitting, and I like the four album sides of a 2xLP, with its inherent groupings of songs and "breaks" to catch my breath and let things set in a bit. This is certainly a tremendous effort from U.S. Christmas, but it's challenging, and the pace lags somewhat in the middle of the record, bookmarked between the longer and more upbeat tracks. Still, I'll recommend it, this is a great band, and another great release to their catalog that I think just needs more listening time before I really grow to appreciate its subtleties, much like the first album. Fans of latter day Earth, Across Tundras, and all things trippy take note." -Andy "Dinger" Beresky (http://www.stonerrock.com/)

"A few months ago one of my friends was hanging out at South By Southwest (you all know how I feel about that shit, my friend is lucky I still speak to him), and I made him promise me that he would check out U.S. Christmas. I think they were playing a Neurot showcase. I don’t remember. He sent me a text mid-way through their set saying that the band’s percussionist was frying on mushrooms, and that the band sounded incredible. For the first time in my life, I was actually jealous of somebody at SXSW. I guess there is a first for everything.

My love for U.S. Christmas is similar to that of artists like White Hills, Emeralds, Harvey Milk, Spiritualized or Earth. They can do no wrong. If a new album is on the horizon, you don’t have to ask me, of course I need to obtain multiple copies on different formats. When the first e-mail graced my inbox detailing the new U.S. Christmas album, Run Thick In The Night (a title culled from the Sam Peckinpah western Pat Garrett and Billy The Kid), I demanded an advance. I requested an interview too…but we’ll see if that ever materializes.

If you’ve heard the band’s recorded output, the foundation of the band’s sound should be familiar by now. Guitars (two, three, maybe sometimes four!?), synthesizers, drums (sometimes two drummers!), bass, drones and strings (most often violin). Salt The Wound featured cuts (some reworked or re-recorded) from the band’s first two self-released CD-rs, Prayer Meeting and Bad Heart Bull (I guess now’s as good a time to say that if you own either of these, I need to buy them from you). The band’s self-titled EP was the first recording of theirs I heard. From the first bars of the fantastically raw, spaced-out blues rocker “Lazarus” I was one-hundred percent sold. By the time Eat The Low Dogs was released, I’d started hailing USX as one of the best rock bands in the world. The have been desribed somewhat simplistically by various music rags as “stoner rock,” but there is much more depth to the band, in my mind they defy such easy classification. There’s a southern, bluesy aspects (without that annoying whiskey-soaked posturing you find on a lot of stoner/metal records). There’s also a ton of far out, Pink Floyd shit involved. Synthesizers and effects pedals spiraling off into distant galaxies, kaleidoscopic and grand, pierced by the heavily-processed vocals of guitarist Nate Hall.

Run Thick In The Night is as consistent and far-out as anything the band has released to date. Some of the melodies actually stand out now, instead of being crushed to dust beneath walls of noise and feedback. You can actually hear chord changes! The band doesn’t play with space as much as on Eat The Low Dogs or Salt The Wound (see: “Silent Tongue,” “Lazarus,” etc.), but the increased attention to filling in gaps between notes aids the band’s desired wall-of-sound. As someone who loved and appreciated the — dare I say it — minimalist compositions of the band’s earlier albums, I’m happy that the more fleshed-out songs on Run Thick In The Night don’t distract from the band’s essence. So often a band decides to record a new album with a highly-touted producers (as USX has done this time around, enlisting Minsk’s Sanford Parker to record, whose credits include Pelican, Lair Of The Minotaur, Nachtmystium, Zoroaster and more) to terrible, over-produced results. That’s most certainly not the case here.

Highlights include the so-very-U.S.-Christmas-esque opener “In The Night,” the acoustic guitar and violin ballad — that’s right, it’s a fucking kick-ass ballad — “Fire Is Sleeping,” and “Suzerain,” which sounds like what Rex could have sounded like if they didn’t go for broke with the alt. country vibe after their first LP. “Fire Is Sleeping” or “Devil’s Flower In Mother Winter” — both stellar acoustic dirges — remind me of that self-titled Flying Canyon record. It’s not CSNY on horse tranquilizers in an echo chamber, but it’s close. Of course, these tunes sound prettier.

The 13-track album closes with the slow-churning hymn, “The Moon In Flesh And Bone.” This is U.S. Christmas at its best. Minimal guitars, straightforward drumming, oozing with violin drones, slow-building with call-and-response vocals, finally reaching its crescendo, catapulting the listener into the deepest regions of space, eventually collapsing into a mess of chaotic noise. At some point I realized that those swirling synthesizers — the key elements of the bands previous albums — had quietly exited some time ago. It’s okay. The guitar/violin interplay is just as great, and it shows that U.S. Christmas is so much more than just a one-trick pony. USX is now capable of both sending you off into the deepest, uncharted recesses of your brain — where the totally psychotropic shit resides — and breaking your heart with ornate requiems. I too once tried to oversimplify the U.S. Christmas sound to a friend by saying, “They pretty much have only one song, but I fucking love it and they play the shit out of it.” Run Thick In The Night blows that idea out of the water, and I am happily humbled to hear it. Like I said earlier, you can’t easily classify a band like U.S. Christmas. You just have to tell people that they fucking rock."-Evan (Swan Fungus)