Do you like beer? Check. Do you like metal? Check. Do you want your face ripped off with some blistering riffs? Check. The CD in heavy rotation this week on my weekly commute to work has been Black Sleep of Kali's most recent release on Small Stone records called "Our Slow Decay". The band hails from Denver, Colorado and has been compared to such luminaries such as Mastodon, Bison BC, and High on Fire just to name a few. So if you need your fix of sludgy bombastic riffage then I suggest giving Black Sleep of Kali a generous listen. 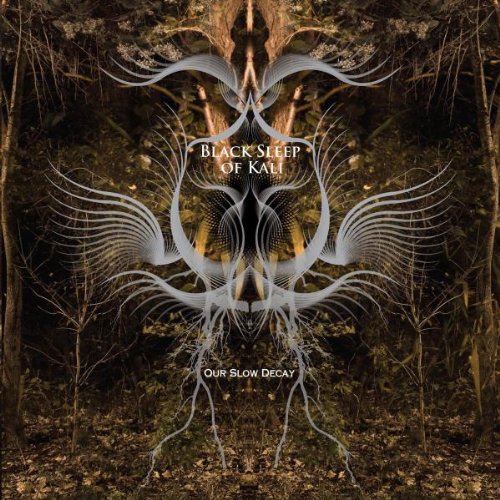 "With their 2010 debut album, Our Slow Decay, Denver, Colorado's Black Sleep of Kali cast themselves into the crowded fray of post-modern metal bands like Baroness, Torche, Black Cobra and Mastodon, whose fusion of finessed musicianship and bruising violence, primal sludge and progressive complexity, hardcore and metal has arguably become the entire metal genre's leading-edge niche at the start of the ‘10s. And there's certainly no denying that these influences frequently loom large in Black Sleep of Kali's rearview mirrors, because there's just too much Mastodon spread across the epic "In Time," lots of Black Cobra studding the serrated semi-thrashing of "There is Nothing," and plenty of Torche in the omnipresent shouted vocals (and occasional vocal harmonies!) heard throughout. Luckily for the Denver-based group, not even their evident debt to these style-defining forefathers can taint their unquestionable musical ability, nor compromise particularly enjoyable efforts like the briskly galloping "The Crow and the Snake," the mean staccato riffed "The Great Destroyer," and the doom and stoner undertows displayed by "Big Sky." Which is to say, there is abundant individual promise nestled within Black Sleep of Kali's familiar frameworks, and this just places the onus upon them to carve increasingly distinctive material out of the monolithic granite building blocks quarried by others who came before."-Eduardo Rivadavia (All Music Guide)

"Black Sleep Of Kali (aka BSOK) also brings a sense of chaos to what they do but instead of ramping up the destruction they lay it into a solid groove. Part High On Fire, part Slayer then adding their own dash of this and that Black Sleep Of Kali are another band pushing what groove or stonerrock is into the next wave.

The days of slow stoned grooves are being replaced with a sense of anger and urgency, as if all the stoners found out their stash was gone and got pissed. BSOK’s new album Our Slow Decay is testament to what can be done with groove Sabbath inspired rock when the right people are involved.

Often when a band decides to follow a Sabbath track they abandon all other forms of metal in order to try and write Masters Of Reality II or their own version of a Sabbath record. BSOK are fully aware they have a Sabbath tint so to offset that they bring in elements of thrash metal. It all follows the same musical track but the push/pull of the two styles gives Our Slow Decay a three dimensional depth that a lot of bands in this genre lose. BSOK also knows how to write really cool riffs and then beat the shit out of them.

Much like High On Fire the true secret of BSOK is their drummer who elevates each song into something completely different. A song like “The Crow And The Snake” revolves around a riff that it would be so easy to just lay into with a groove beat. Instead the drums are everywhere, playing weird patterns, off times and fills that sound like they should fail but don’t. It’s not that the drummer (referred to as Gordon) over plays, it’s more that he’s decided to be another guitar in drum form. The grooves are there but so are the notes and solos and all that which is usually left for only the six string.

Our Slow Decay is a record largely shaped by the bands ability to manipulate the low end. This isn’t just bass heavy low end BSOK stake out a territory where everyone adds an ingredient to the low-end stew. The guitars aren’t just heavy they are harshly fuzzed out and scratchy. The bass has it’s own gritty sound to it that calls up images of the strings being so loose the swing off the body. Even the drums seem tuned particularly low and thick. Using that mixture Our Slow Decay has the feeling of a drunken blackout, or at least that fuzzy head you get during the next day’s hang over.

The one Achilles Heel to the album is that the songs tend to go on a little longer than they should. Most bands, even the masters in this genre, tend to get carried away with the "jamming” element when in reality they should get in and get out. A few of the songs here could have been shaved by a minute or more but how do you fault a band for going too long when their whole genre is guilty of it? Black Sleep Of Kali is a great band who combine heavy groove rock with elements of thrash and that kicks ass. If they could rein in the songs a bit they’d be almost unstoppable."
- Iann Robinson (Crave Online)