New Band To Burn One To-Deathbeds

The "New Band To Burn One To" today is Deathbeds. 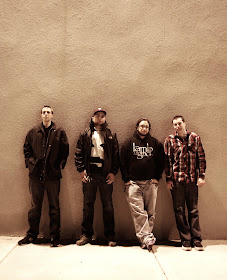 Deathbeds are a four-piece band from Philadelphia, PA. One part Entombed, one part Integrity, they combine sludge-fueled metal and riff-oriented hardcore in a way that’s appalling, yet reassuring. Taking cues from doom and sludge but lacing it with the sensibility of the most visceral hardcore they know that to be the man you’ve gotta beat the man.

Formed in 2007, the 'Deathbeds' EP was released digitally in 2008, and laid the groundwork for 'No Funeral.' 'No Funeral' was recorded in the summer of 2009 at Red Planet Studios and was co-engineered by Joe Smiley and Chris Grigg (Woe). 'No Funeral’ is out now as a 7inch, courtesy of Young Lungs Ltd and is limited to 300 copies on green vinyl. Both the 'Deathbeds' and 'No Funeral' EPs are available digitally on a "pay what you want" basis through Communitas Media. 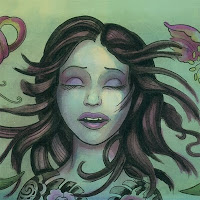 "Deathbeds from Philadelphia have one of the most entertaining bio write-ups on their Myspace site, so extreme it can't possibly be true but i kind of hope it is because that might explain why this band is so off the rails. They have released this 7" on the Young Lungs label but its also available as a free download, make sure and check their site for details. "No Funeral' was recorded in the summer of 2009 at Red Planet Studios and was co-engineered by Joe Smiley and Chris Grigg. The EP contains three tracks, all of which are guaranteed to rip your head off with a sound thicker than your fat aunt's hips. The band play heavy duty sludge/doom rock with a sound that blends the sound of everyone from Iron Monkey, Cathedral, Sourvein to early Entombed. One thing that is clear from the opening track "No Funeral" is the band is beyond heavy but has a incredibly catchy groove. "No Funeral" is a mid-tempo burner that stomps its way through 3 short minutes and is catchy just as much as it is a neck-snapping bone-crunching exercise in dirty sludge metal. The guitar's and bass sound's are thick but clear, drums pound in a energetic but tight style. The vocals are pure beef with a bellowing almost death metal sound and it compliments the riffing perfectly. Deathbeds don't mess around, they keep songs short and to the point, they make their statement and leave you searching for that repeat button. "Eighteen Hundred and Froze To Death" kicks off with a traditional doom riff, slowly grinding with slothful fuzziness. The vocals range from sick, tormented screams to bellowing and groaning. There is a fine balance between out and out brutality and a traditional riffing style making a blend that is undeniably infectious but still will slay you every-time. Stuck in the middle of these two tracks is "Tyranny Of Will" and its another winner,a crunching riff and more filth ridden vocals from Mike Murro. The guitar duo of Stephen Edelson and Eric Sac are top-notch brutal exponents of the monster riff, they are totally locked into the groove at all times and play with some real passion. The rythym section of Chris Cherasaro (bass) and (i am assuming its his brother) Dave Cherasaro (drums) are totally solid. No Funeral in some ways harks back to the days of sludgy doom and metal in the late 80's and early 90's. There was a certain quality to the sound of the bands back then and Deathbeds also have that sound. The EP is over and done with in around 12 minutes so needless to say this band needs a full-length album out ASAP. If this is anything to go by, it will crush posers everywhere." 9/10 (Doommantia)