In celebration of the 25th anniversary of The Melvins, I have decided to make one of my favorite Melvins albums "Stoner Witch" the Album Of The Week. If you have never heard this album, do yourself a favor and listen now and then after you listen go and listen to as much Melvins as you possibly can. Freakin' Awesome! 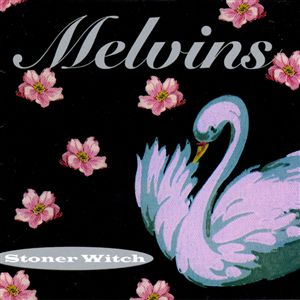 "Stoner Witch is one of several ESSENTIAL Melvins albums everyone should own. This is probably their most hesher-friendly record. From the quasi-Metallica-esque verses of "Revolve", to the stoner dirge of "At the Stake", Stoner Witch consistently captures the attention. Many songs are bizarre, experimental, and downright noisy. It's one of those albums that really doesn't have any "bad" songs. Challenging, yes. Fascinating, uh-huh... but none of them are what I would consider "throwaways". Many listeners will be turned off by the Melvins' non-linear take on rock, but I would advise everyone to give this album a try, and if it doesn't grab you by the cerebellum, try again." (Tony Dawes)

The early to mid-'90s proved the Melvins' golden age, and the three principal albums from that period — Stoner Witch provides the centerpiece — are virtually unassailable in their range, depth, power, and experimental courage. Picking up on the basic framework of Houdini, Stoner Witch resolves into an ear-catching workup of classic rock themes, tempered, of course, with a fairly judicious sampling of acid-trip detours. Where Houdini resided more in an expansive — though lugubriously heavy — metal vein, refining the techniques built up through the band's early struggles, Stoner Witch truly showcases the band at the apex of their wide-ranging creative abilities. The melodies — yes, melodies — work seamlessly with the ubiquitous chugging riffs; Buzzo's vocals, often reminiscent of a David Thomas (Pere Ubu) after a few weeks of no-nonsense boot camp, are sometimes quiet and reflective, and more often than not, positively Stentorian. And naturally, drummer Dale Crover's percussion and pounding behind the kit is astonishing, powerful, and daring. The album opens with the distorted thud of "Skweetis," the amps and cymbals washing well into red-line territory before yielding to a three-count of heavy-duty classic rock with "Queen," "Sweet Willy Rollbar," and "Revolve." From that point on, there is a deliberate sea-change, beginning with the faux-lounge tweaking of "Goose Freight Train," the nearly unlistenable Merzbow-noise of "Magic Pig Detective," and ultimately the hammer-down hardcore of "June Bug" sandwiched between two ambient tracks: "Shevil" and the album closer, "Lividity." (Patrick Kennedy, All Music Guide)