The Album Of The Week is "Ride Satan Ride" by Serpent Throne. 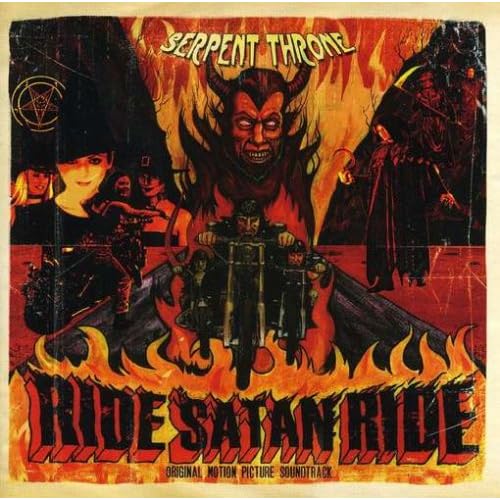 Say there was a heavy rock festival in like '72 where Black Sabbath, Wishbone Ash, the Scorpions, Budgie, and like Cactus are supposed to play, but then, due to a series of plane crashes and natural disasters, only 1 surviving member from each band can make it. In order to calm down the crowd of heavy rockers, Iommi grabs a couple dudes from the other bands and puts together an emergency band. And then Uli Roth says, "We don't need a singer because he'll just get in the way of the riffs." I think that's what Serpent Throne is aiming for. Whether we get there or not is another story, but we'll drink some beer and rip some guitar harmonies along the way."-Serpent Throne

Serpent Throne is a recent discovery for me and I've been completely enthralled with these guys since first hearing the bands work on myspace. In this day of cookie cutter doom bands it's rare for me to find something that I can latch onto, so I am absolutely elated that I stumbled across this band.

Serpent Throne hails from the city of brotherly love (Philadelphia) and includes at least one member of the now defunct Otesanek. The band plays a brand of hard rock that harkens back to the golden age of heavy riffs and tasty solos called the 70's. And just to be clear, Serpent Throne does not wallow in the mires of prog like Witchcraft or Burning Saviours. There's no pretense with Serpent Throne, these guys bring the rock and that's it.

Ride Satan Ride has really tapped into the essence of what Sabbath and a few others were doing back in the day. This self released album is chuck full of catchy heavy riffs and sweet soulful leads. The guitar duo of Fenton and Argott is really the highlight on the album and they deliver the goods in spades. I've not heard such heartfelt and soulful guitar playing since...well, the seventies. The bands rhythm section are no slouches either and hold it down with just the right pomp and swagger. All of these guys must have old souls; how else would they be able to conjure such authentic sounds? Born to late indeed!

One thing people might take issue with on this record is that there are no vocals. But in all honesty I did not miss them at all. A bad vocalist could ruin this band so I'm actually kind of grateful that there are no vocals. Sure, there are times when vocals probably would have been cool (if done correctly) as the songs are written in sort of a standard format and are not totally "jammy" feeling, but for me the guitar work fills in the space nicely so it's not a problem.

The record sounds great and one would not gather that this was a self financed release by listening to it. One thing I appreciate is that the sound of the recording is not retro per se. It does have an analog, warm and fuzzy vibe but does not have that deliberately sought after vintage tone that bands like Witchcraft like to capitalize on.

Ride Satan Ride will remain in rotation at this end for quite some time I'm sure, and I suggest you pick this album up if you want to take a trip down memory lane and love the rocking 70's!