The Album Of The Week is "Life's Trade" by Samothrace. 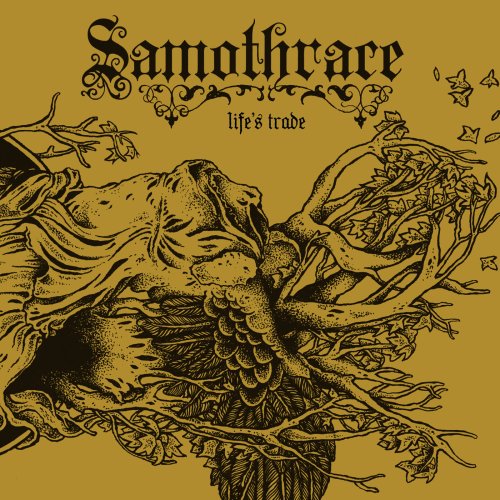 First Cough, then Thou, then Samothrace - it's a great time for American
sludge/doom. Why this Lawrence, KS outfit named itself for a Greek island
is unclear, as it sounds distinctly American. Big slabs of downtuned dirt
abut melodies that recall Earth's leanings towards Americana. In fact,
this record might satisfy those disappointed by Earth's recent refusal to
drop the hammer. It has the soul - the jangle, the blues - but it also has
the weight, constantly shifting tectonic plates so that slow never becomes
static. These tracks are 10 minutes plus, and they feel much shorter. On
only its debut, this band has mastered the momentum that makes good doom
much more than just slow tempos. (Add Renata Castagna to the list of
worthy extreme metal axewomen.) Producer du jour Sanford Parker turns in a
reliably thick, naturalistic recording.

David D'Andrea refracts the floral/angelic theme of Tom Denney's previous
artwork for Samothrace (which is extremely similar to his cover for
Sourvein's Ghetto Angel) into a lovely gold/black package. The LP version
comes in double gatefold vinyl with a poster (gold vinyl limited to 150
copies); mailorder copies include a patch and sticker. This is yet another
killer release this year for 20 Buck Spin, who have a spiffy new
label/distro website. Invisible Oranges)