The Album Of The Week is "Pantheon of the Lesser" by Ocean. 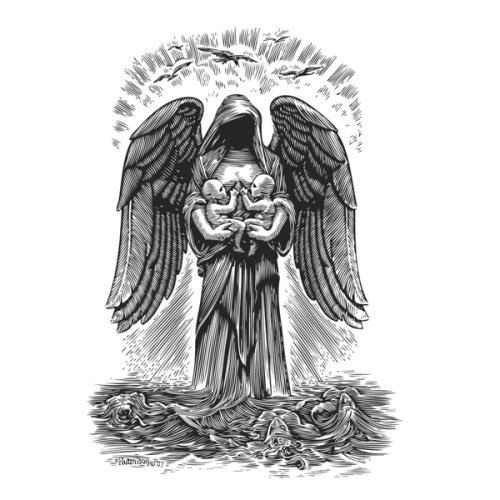 "After Ocean released their 2006 debut, Here Where Nothing Grows, it quickly became indie noise label Important Records’ highest selling album. This Maine-based doom troupe return with Pantheon of the Lesser, two lengthy tracks of artful gloom. Clocking in at 35 minutes, “The Beacon” was performed as Ocean’s complete set on their recent tour with Boris and Mono. It could also be a Bloody Panda outtake, as it features the chanting and then shrieking vocals of BP front-waif Yoshiko Ohara. Guitarist/vocalist Candy’s growls have become more guttural and prolonged, as he stretches them over many measures, and the song’s structures hearken back to My Dying Bride, with a Khanate modernity. “Of the Lesser,” a mere 23 minutes, is slower and more introspective, like Neurosis at half-speed. Candy layers his vocals over the ebb and flow of the tracks, and the guitars seem appropriately mournful and less smothering than in “The Beacon.” The only impediments here are the songs’ prodigious lengths, for Ocean demand that one take the time to listen to each track in its entirety. Appealing to fans who listen to albums from start to finish, Pantheon of the Lesser is art doom at its apex." (Chris Ayers, Exclaim.ca)

"Sublimely constructed symphonies of controlled aggression that can build to mind-altering climaxes, while still never eking the tempo above the crawl of a dirge." -- Tiny Mix Tapes "Epic sloughs of doomed despond with a sleight of hand that graces their mournful meanderings with a creepy melancholy." -- Terrorizer