Talk about dedication to the music. It is 5:33 in the morning on my birthday and I am giving you an Album Of The Day. Well, this one is pretty obscure, but rocks nonetheless. The Album Of The Day is "Gathering Dark 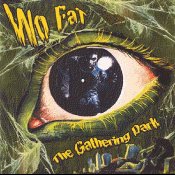 From the opening “The Wolf” onwards, the guitars buzz away inside my head and this is to the credit of guitarists Ken Stump and Matt Watkins who are influenced by Marino, Alvin Lee, Leslie West, Tony Iommi and Howlin ' Wolf. Together with a rhythm section as refined and valuable as Tim Wilson and Michael Waker , the twelve tracks put forward are complimentary in both their groove delivery and the rawness in sound the quartet often evoke.. Their material is based on powerful Sabbath/ Motorhead -like riffing, but tracks like the titlesong and “Holy War” have cool bluesy Skynyrd /Black Oak Arkansas -touches. “The Gathering Dark” swallows in a swamp of Beefheart -bluesiness and murky delusional Magnet dripping riffs, but the tune is able to capture a vibe and groove with it. Some of the passages do grab a voodoo sense of bluesy psychedelica , particularly on my fave “From Beyond” and the instrumental “ Runnin ' The Voodoo Down” .Let us hear more of the rapid-fire guitar riffs and hammering drums of “They're Coming For ou Barbara” and “Company Man” too. Further on we have a Mountain -cover “Land of Milk and Honey” with a tremendous guitarsolo . (Cosmicmasseur, Concreteweb.be)