The Album Of The Day is "Blue Cathedral

" by Comets On Fire. 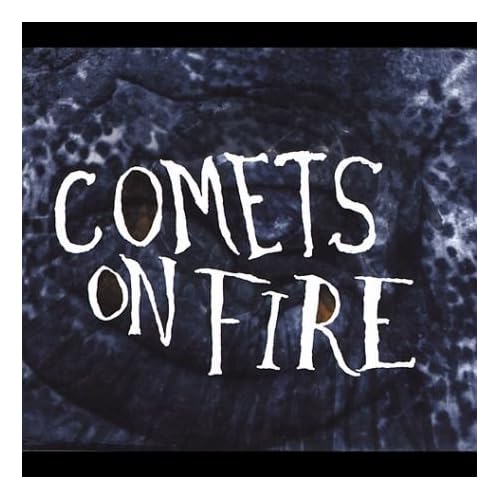 Blue Cathedral, the third outing from Santa Cruz's Comets On Fire, is the culmination of five years of sonically overdriven rock & roll research. Here, the original quartet -- Ethan Miller, guitar and vocals; Noel Harmonson, echoplex and analog keyboards; Ben Flashman, bass; Utrillo Kushner, drums -- is augmented by new member and second guitarist Ben Chasny (aka Six Organs of Admittance) and the intermittent saxophone playing of guest Tim Daly (at whose studio this album was recorded). Chasny guested on the sprawling psychedelic freakout that was 2001's Field Recordings from the Sun. One of the most captivating things about this 2004 disc is how it weds the band's garagey MC5 meets Hawkwind attack with a more textural, spacious approach that includes keyboards up front much of the time -- as in organs and pianos adding some Ummagumma-Atom Heart Mother-ish Pink Floyd sounds to the cauldron. Punters shouldn't fear that the heaviness is gone, however. Far from it. One listen to "The Bee and the Cracking Egg" or "Whiskey River" should dispel those notions immediately. The Rob Tyner strangles Robert Calvert tactics that signify Miller's vocal approach are still squalling over the top of earsplitting guitar riffs -- twice as heavy as before. Harmonson's echoplex sends everything into the third dimension, and the rhythm section is so solid, so forward-driven, that it could hold its own with Cream's. "The Antlers of the Midnight Sun" is one of those powerful surging tracks that leaves the listener breathless and energized afterwards. The dueling off-the-rails guitars that push everything in the mix far into the red, the noisy adrenaline boost of that echoplex writhing over the top of the everything but the vocal, and the unwound bass and drums make this one of the great events of the new psychedelia. The percussion wound through the acoustic and electric guitars on "Wild Whiskey" is positively strange and beautifully, humidly seductive. But the closer, "Blue Tomb," walks the fine slash of a stiletto edge of tripped-out psych balladry and bone-cracking, plodding, über dope ROCK, with the added dimension of keyboards and feedback propelling it into the stratosphere. It may have taken Comets On Fire three albums to pull all the parts together -- something that was very common with acts that developed over time in the 1960s and '70s but is almost unheard of today -- but with Blue Cathedral, they've realized that there are no boundaries and no limits. This album just may signal the beginning of an exciting new era in rock music. (Thom Jurek, All Music Guide)