The Album Of The Day is "Millenarian" 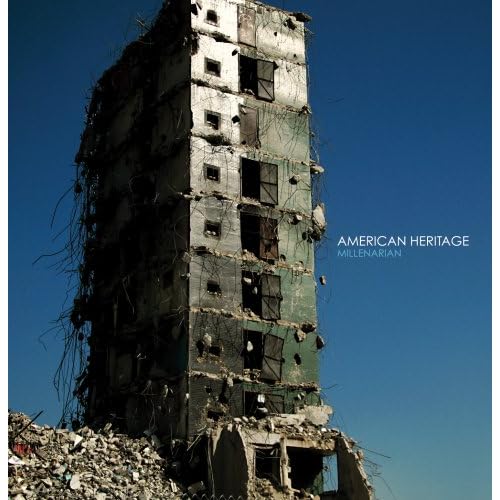 Despite the intricate beauty and sheer force of instrumental compositions by Pelican, Red Sparowes, and Don Caballero, one can't help but wonder how their music would be altered with vocals. Insert American Heritage, a Chicago-based thinking man's metal band whose instrumental debut, 1999's Why Everyone Gets Cancer, was chock-full of highly technical, heavier-than-thou shredding and jazzlike drumming in the vein of Mastodon (as evidenced by the bands' split 7-inch). On the trio's fifth album, Millenarian, Adam Norden's demented growl now leads the assault. While the ruthless wall of noise, more neurotic than Neurosis, still puts listeners in a choke hold, Norden's punishing vocals become the right-hand punches that eventually break one's face. From the opening rapture of "Brootal: Axxes of Evil" through the apocalyptic closure of "Piss Engine," Millenarian sounds like the aural equivalent of "Fucking a Napkin Full of Toenails." The downtrodden moments of drone and doom rehash Sleep's Dopesmoker and Eyehategod's Dopesick while serving as brief shelter from the storm of time-signature changes. Speak now or forever hold your piece. (Austin Powell, AustinChronicle.com)