The Album Of The Day is "Lecherous" by A Day Of Pigs.

According to A DAY OF PIGS' official bio, ""the band's vocalist, Kevin LeBlanc, has already received international acclaim for his extraordinary and disturbing tattoo work, and one need look no further than his additions to skin to understand the dark subject matter of his lyrics. A theme such as betrayal, loss, greed and apathy seethe underneath LeBlanc's soul-wrenching howls and shrills, while the delivery of musical apocalypse behind him is handed out with pleasure. The rest of the band brings with it decades of performing, touring, and recording experience; guitarist Steve Silberg logged extensive time with seminal New Jersey hardcore acts ANOTHER STATE OF MIND and SMOTHER, drummer Bill 'Bixby' Belford was a member and integral contributor of other-worldly doom entrepreneurs SOLACE and TOW, and with our newest member T.J. on bass from the brutal FAT KID CAMP as well as LIVID."" The group adds, ""A DAY OF PIGS follows no man, seeks nothing from above, yet only wishes to trample under foot, the masses as they march hand in hand over the falls."" 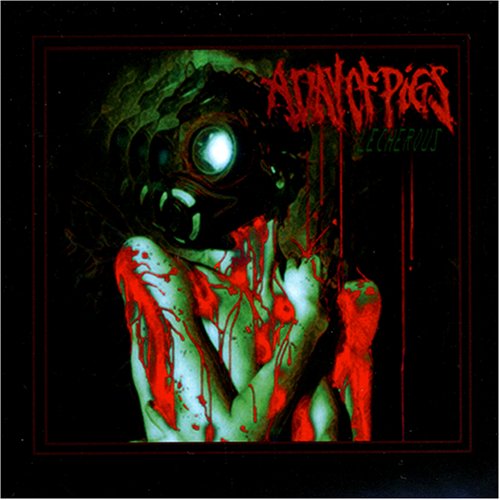 Take the down-tuned riffage of Torche, a bit of Mastodon's early songwriting direction, and a heavy dose of Eyehategod's sludgy grit and the result is A Day of Pigs, the latest addition to the Spare Change Records roster. And with the fifty minutes of rumbling stoner metal offered up on Lecherous, it's not hard to understand why this small band from New Jersey deserves a thorough listen.

Lecherous bursts out of the gates with "Innominate," a track launching into a set Bloodhorse-esque riffs that received a Facedowninshit style makeover. Prominent low-end, driving drumming and howling lead guitar work all lead to one hell of an abrasive listening experience. "Way To Go Fuckface" lives up to its stellar name, successfully combining periods of Floor/Torche riffs, coarse bass tones, and moments of throaty singing. "The Lions Cry" explores some different musical territory, building from an eerily melodic intro into a slower, more sludge based number. Anyone looking for a strong dose of riff-heavy stoner metal should find a lot to enjoy in A Day of Pigs' Lecherous.

The only downside of the record comes with a few of its slower, cleaner melodies. Appearing mostly in the two instrumental tracks ("665," and, "666"), these interludes feel a little out of place with the majority of the disc's abrasive content. The intentions were certainly good, as such elements often help to round out an album, but the execution and placement are not as fluid as they could have been. Nevertheless, these cleaner moments are the minority on the disc, and the abundance of sludgy stoner metal riffs, coarse vocals, and thick low-end make Lecherous pretty impressive for a debut full-length.

Bottom Line: Listeners who enjoy everything from sludge metal to stoner rock should be jumping at the opportunity to check out A Day of Pigs' Lecherous. And any minor issues with album continuity are overshadowed by its gritty combination of influences and ruthless unleashing of solid riff after solid riff. (Nick, Lambgoat.com)

For fans of Torche, early Mastodon, Eyehategod, High On Fire, Down, Neurosis, and Sweet Cobra.