The Album Of The Day is "Staring At The Divine" by Alabama Thunderpussy. 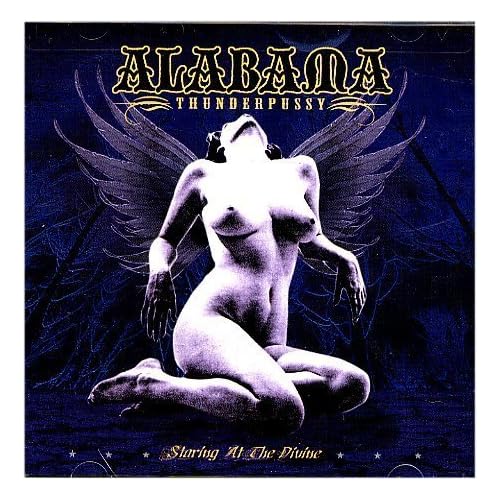 Possibly the biggest band to be set adrift after the unfortunate bankruptcy of the great Man's Ruin label (R.I.P.), stoner rock mainstay Alabama Thunderpussy was, not surprisingly, also one of the first to find a new home. In fact, both the band and their as yet unnamed fourth album were quickly snapped up by astute Relapse Records, who, keen to expand their roster beyond its extreme metal boundaries, knew a good deal when they saw one. However, the transition period leading up to this was still no cakewalk for ATP and, after losing two founding members, the group re-recorded and remixed most of Staring at the Divine before its belated 2002 release. Thankfully, their diligence is rewarded by what is arguably their best effort so far. Standout tracks like "Ol' Unfaithful," "Shapeshifter," the Clutch-like "Whore Adore," and the awesome, almost Thin Lizzy-esque "Hunting By Echo" feature immense, memorable riffs, which find the quintet roaring with more purpose than ever before. Also, Staring at the Divine is infinitely more cohesive and focused than the band's previous offering, the ambitious but often sprawling Constellation (the band's barefaced attempt at becoming Lynyrd Skynyrd); probably because most of the stylistic adventures explored on Constellation are featured here as well, they're just boiled down to a lean, muscular, full-force impact. In fact, the album's only oddity, the country-fried "Amounts That Count," is saved for last, transforming what might have been an intrusive aside into a refreshing coda. More than anything, Staring at the Divine exudes a confident maturity that leaves one feeling that Alabama Thunderpussy is finally on its way. (Ed Rivadavia, All Music Guide)