The Album Of The Day is "Warpig" by Canada's Warpig. 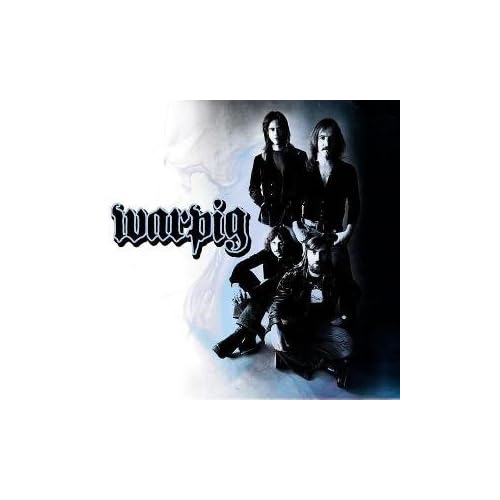 One of those bands that miss the boat to stardom during their active lifetime, Canadian hard rockers Warpig would experience a zombie-like afterlife following their demise, when they joined other cult acts like Sir Lord Baltimore, Leaf Hound, and Captain Beyond in haunting the minds of hard rock and heavy metal collectors. Vocalist/guitarist Rick Donmoyer, keyboard player/vocalist Dana Snitch, bassist Terry Brett, and drummer Terry Hook had all accumulated ample wood-shedding experience with an assortment of amateur bands (including the Kingbees, the Wot, and Mass Destruction) before coming together as Warpig in 1968. Smitten with recent, revolutionary albums by the likes of Cream and the Jimi Hendrix Experience -- seedling examples of what would come to be described as "hard rock" and, later, heavy metal -- the members of Warpig began defining their own style around these new, more powerful sonic parameters from their base of Woodstock, Ontario (just an hour outside Toronto). They weren't alone, of course, as 1968 was the year that spawned debut albums from seminal proto-metal acts like Blue Cheer, Iron Butterfly, and Canadian compatriots Steppenwolf, among others, and the last two, in particular, bore numerous similarities to Warpig's organ-heavy hard rock sound. By the following year, the quartet was building quite a fan following throughout the Ontario club circuit and had signed a contract with local independent Fonthill Records, completing work on their eponymous debut album in late 1970 and proceeding to perform with several visiting luminaries, such as Mahogany Rush, Wishbone Ash, Manfred Mann, and Savoy Brown. But poor distribution and promotion on the part of their indie label meant that Warpig remained largely unknown outside of Canada, and there was little progress made until 1973, when London Records offered to re-release the album with different cover art and two completely re-recorded tracks cut with future Rush producer Terry Brown. Unfortunately, time and changing trends had conspired to seriously date Warpig's once cutting-edge sound, and even though the Deep Purple-esque single "Rock Star" actually scraped into the Canadian charts and convinced London to commission a second album, the band would fall apart following the mid-session departure of Terry Hook and, soon after, Dana Snitch. Rick Donmoyer went on to play with Ash Mountain, but both Warpig and their lone, overlooked album quickly faded into forgetfulness -- until the new millennium, that is, when rare original copies started fetching outrageous prices on eBay. This may have been one of the factors behind Donmoyer and Snitch's reconciliation after 30 years of silence, leading to discussions of a full-blown Warpig reunion, and the re-release of their debut album on CD for the first time, via Relapse Records. (Eduardo Rivadavia, All Music Guide)