The Album Of The Day is "Gran Poder" by Orthodox. 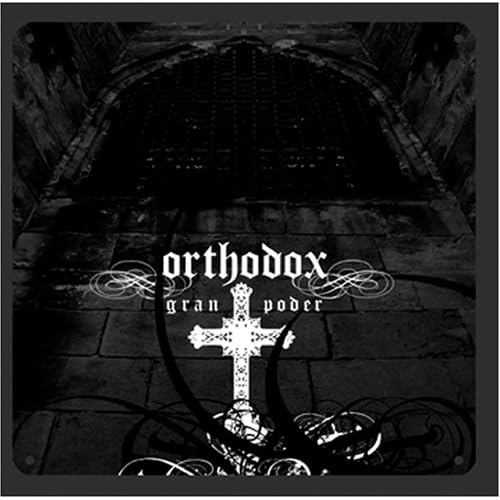 English name, Spanish band; Orthodox is a mysterious trio from Sevilla who like to dress up like hooded, Benedictine monks, and whose debut album, Gran Poder, emulates the great powers of extreme doom in the '00s: Earth, Sunn 0))), Boris, etc. At 28 minutes of lethargic, lumbering, gradually developing riff themes, overwhelming opener "Geryon's Throne" is clearly a (demon) child of Sleep's "Dopesmoker," with warbling, unintelligible vocals that only surface about ten minutes in, a second half sequence of guitar, bass, and drum improvisations that seem almost jazz-like in spirit, and, finally, an uncharacteristically nippy, full band rock out to wrap things up. Orthodox don't dare repeat this singular feat of endurance as the album carries on, but they come damn close with ensuing epics "Arrodillate Ante La Madera y La Piedra" (11 minutes of Earth-like droning, briefly interrupted by more yodeling and snatches of melody), and the amusingly named "El Lamento del Cabrón" (17 minutes, but featuring much more dynamic diversity and a temporary transformation into High on Fire). All that's left after that are "Oficio de Tinieblas," which is a throwaway piano interlude, and a spitting-image cover of Venom's "Genocide" (tacked onto the American release), which stands out like a super-sore thumb -- but hey, it's Venom. And that about does it for Gran Poder, which hints at some interesting possibilities for Orthodox's future travels, but by itself represents merely a competent, generally interesting album. And, like any ultra-doom opus of its magnitude, enjoyment ultimately comes down to the listener's taste and infinite patience, more than anything else. (Eduardo Rivadavia, All Music Guide)