The Album Of The Day is "Head Full Of Pills" by Valis. 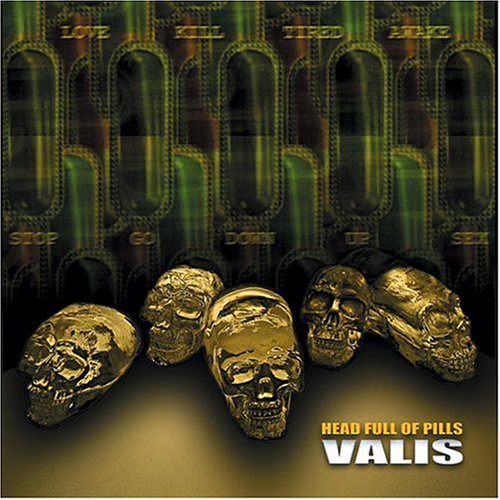 Originally started as a side project by erstwhile Screaming Tree bassist Van Conner, Valis became a primary concern once the reluctant grunge band officially faded into (cough!) sweet oblivion, circa 1998. Come 2004, Valis delivered their third release, Head Full of Pills, for their third record company (Detroit's Small Stone -- the last indie label standing after the "great stoner rock collapse"), and perhaps the most surprising aspect about rambunctious, hook-laden opener "Welcome to Home School" is its crisp and crunchy hard rock production. This is somewhat at odds with Valis' not so surprising taste for loose, almost casual performances, and their unlikely union results in a quite unusual-sounding record. Monster Magnet may be the closest sonic parallel for the decidedly retro but quite diverse songs on display here, whether it's the dreamy psychedelic title track wafting lazily between your ears or the more spacy garage rock aesthetic of "Motorbike" (featuring token hard rock riff number two, it's been recycled so often) cruising down the highway of your mind. Generally sticking by these ground rules, ensuing tunes alternate between mellow (the lysergic wash of "Voyager" and a nearly straightforward rock ballad in "Across the Sky") and rockin' (the wah-wah-intensive "We Got a Situation" and the metallic-tinged "World of Decay") before the closing "Perpetual Motion Machine" embarks on a mission of deeper space exploration. Through it all, the songwriting is usually compelling but never groundbreaking and rarely outstanding, the performances competent but rather staid, and Conner's voice a little strained (suffice to say he's no Mark Lanegan) in an almost Ozzy-esque whine. But it works, so long as you keep an open mind and accept the fact that Valis' intentions are less than world-conquering. Ultimately, Conner is far too unassuming a character for one to condemn this release as a self-serving vanity project; rather, it's a good record by a group of guys happy to be playing rock & roll. (Ed Rivadavia, All Music Guide)