The Album Of The Day Is "The Call Of The Wretched Sea" by Ahab. 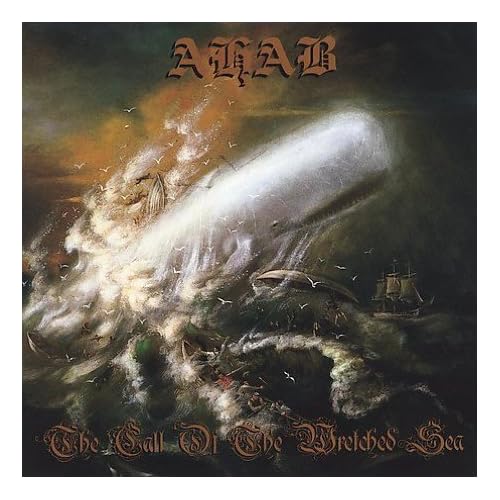 With their ambitious debut album, 2006's The Call of the Wretched Sea, Germany's tellingly named Ahab embark on a treacherous voyage to reinterpret Herman Melville's immortal whaling adventure, Moby Dick, through the suitably equivalent sonic leviathan of funereal doom metal -- or, as they are eager to dub it themselves: "Nautik Funeral Doom." Of course one need only look back a couple of years to find Mastodon's more oblique treatise on the very same literary subject, via their own Leviathan album; but what Ahab lacks in outright originality, they handily make up for with The Call of the Wretched Sea's meticulously assembled husks of words and music (plus, in terms of pure heaviness, this leviathan makes Mastodon's sound as light as a sparrow!). The titanic tandem of "Below the Sun" and "The Pacific" steers listeners away from port, and casts them directly down into the darkest ocean abyss with slothful, somber synthesizer melodies, cataclysmic downtuned guitar waves, and echoing percussive thunders. These provide a formidable frame for lyrics frequently adapted directly from Melville's writings and delivered in an impossibly deep, guttural vocal style that sounds as though it was performed by Moby Dick himself -- har-har! But it's surprisingly clean-droned baritones substituting these rumblings on "Old Thunder," which features an unusually uplifting, orchestrated central portion, bridged by an atmospheric interlude called "Of the Monstrous Pictures of Whales" to yet another colossal epic in "The Sermon," itself boasting a shimmering central passage of near-silent melodic ripples that temporarily interrupt the album's prevalent, monolithic guitar grinds. The Call of the Wretched Sea subsequently achieves a dual climax via "The Hunt" and "Ahab's Oath," both of which are marked by keening, rather infectious melodies, but which still leave the listener feeling as if crushed under the pressure untold fathoms. What's more, their words reveal that Ahab's musical retelling of Moby Dick is only just begun here, with a lot more story from the novel's original argument yet to be set to music on ensuing albums. If and when that comes to pass, Ahab will have their work cut out for them, because The Call of the Wretched Sea has set the funereal doom bar especially high -- or low, as it were. (Eduardo Rivadavia, All Music Guide)

Order "The Call Of The Wretched Sea" here