The Album Of The Day is "Remission" by Mastodon. 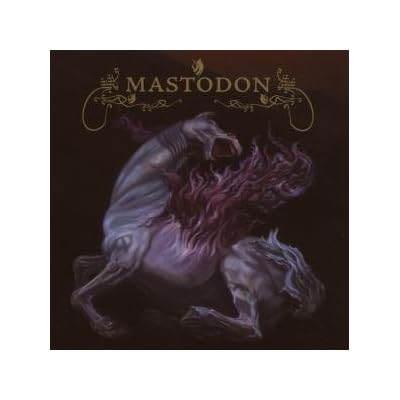 Mastodon seems like a kickass metal name until you realize that the now-extinct American Mastodon was a hell of a lot like a manatee with legs. A member of the Proboscidea family (like its cousin the Wooly Mammoth), the mastodon stood almost ten feet tall and weighed in at roughly five tons-- surely a big beast by any measure. Lacking the killer instinct of its contemporaries, the Sabre-Toothed tiger and the Pterodactyl, the American Mastodon was content to browse, trolling the plains for tasty morsels of shrub. If you look at artist renderings, most paleontologists seem to think the good-natured Mastodon even enjoyed smiling! But as meek and mild as this beast was, its placid demeanor and limited diet-range rated low on Darwin's survival scale, and it thus perished once and for all in 800 A.D.
The implications may be benign, but it remains that the name 'Mastodon' still sounds pretty badass-- certainly more badass than 'Manatee'. And I suppose it imports a metaphor that fits quite nicely for the band Mastodon, an Atlanta, GA-based quartet that has heavy-music lovers everywhere shitting themselves naked. For, like their namesake, this Mastodon represents something utterly imposing, primeval and oppressively heavy.

Mastodon, like pioneering heavy acts Botch, Isis, Converge and Dillinger Escape Plan, prefer to mix their metal with some hardcore, albeit with the strong emphasis on the 'metal' part. The others place a premium on virtuoso musicianship and highly technical song structures, and while that also figures prominently into Mastodon's music, these boys slather it all up in a special sauce that I like to refer to as 'classic sauce.' I'd like to give the credit for this sauce to heavy music �ber-producer Matt Bayles (Isis, Botch, Blood Brothers), but who really knows the sauce-source? What the hell am I talking about? I explain: I'm talking about the tight-jeans, Dodge Hemi, "Starsky & Hutch" production quality, that's what-- the perfect complement to the prehistoric riffing featured all album long. The recording sounds deliberately rustic and antiqued, like that milk-stained fake money you'd buy at the museum. (Admit it: you loved that shit.)

But production is not what prods Mastodon. What stimulates this band's formidable corpus are four super-proficient veteran musicians, two of whom (guitarist Bill Kelliher and drummer Brann Dailor) cut their tusks in Today Is the Day and Lethargy. It's Dailor, though, who takes home the MVP award on Remission; if drummers are action figures, Dailor carries both a rapid-fire uzi (the toms) and an erase-all, double-barreled bazooka (dual-bass drums). I guarantee, he will brutalize you.

Like their metal peers, Mastodon sport some mathematics. But where Meshuggah get deep into calculus and Dillinger Escape Plan prefer trigonometry, these guys enjoy the more accessible stuff-- we're talking pre-algebra here. They drop in just enough to keep the arrangements flavorful, but not so much as to overload the vintage guitar riffs with Dream Theater-like complexity. And then they counterbalance it with some nice, old-fashioned, Sabbath-style metal attitude: guitars crunch, wail, and burn. The complete package sounds timeless, but in that unbelievable way that you've never heard before.

Maybe there exists a parallel world where the mighty mastodon kept on walking. And maybe, just maybe, that mastodon met a sabre-toothed tiger and maybe they had kids (work with me here). And those kids crossed over into our world, became human beings, moved to Atlanta, and formed a band. A great band whose raging, sodden hellfire now beckons you to warm yourself at its side throughout the impending winter months. A band whose crushing, odiferous, sodomizing blade dices like a Popeil cuisinart and runs you through with gruesome exactness until you beg for Remission. This band is Mastadon. Thank God for the miracles of crossbreeding. (Brad Haywood, PitchforkMedia.com)