Album Of The Day-Roachpowder-"Viejo Diablo" (1998)

Going back a bit, I decided to dust one off and listen to while I am building a new bathroom in my basement. The Album Of The Day I am referring to is the 1998 classic "Viejo Diablo" by Swedish Stoner Rockers Roachpowder. 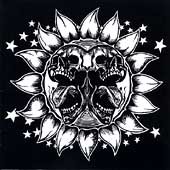 With its singularly heavy riffs and passionate vocals, this 1998 debut from Sweden's Roachpowder announced the group as one of Europe's premiere stoner rock upstarts. Taking sonic and thematic cues from America's East Coast and desert stoner heroes (Monster Magnet and Kyuss, respectively) while adding some style of their own, the group produces a daunting grind that's superior to many of the genre's many second-wave artists. The Black Sabbath groove evident in many of the category's best bands is certainly present on Viejo Diablo, along with a cool determination that's alternately chilling and exuberant. On standouts like "Black Stone," the vocal phrases and overall dynamic might remind listeners of Dave Wyndorf and his crew, but Roachpowder generally make their own way without copying anyone. Other choice tracks include "Galactic Blues," with its cowbell stomp, and the atmospherically wicked "Cosmic Emperor." Listeners looking to expand their stoner rock vocabulary beyond the three or four perennial American favorites (Fu Manchu, Queens of the Stone Age, etc.) should start with Viejo Diablo from the lesser-known but seriously determined Roachpowder. (Vincent Jeffries, All Music Guide)