The Album Of The Day is "Lunar Womb" By The Obsessed. 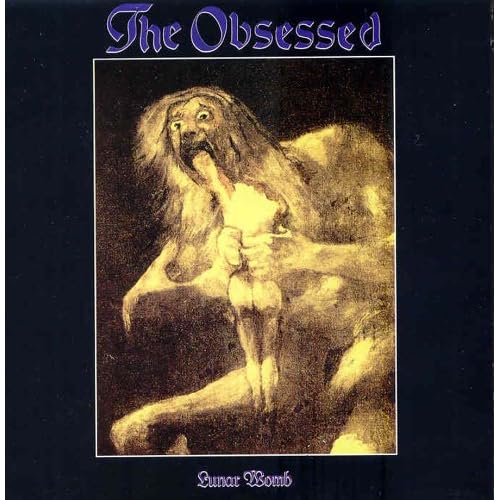 After fronting Californian doom gods Saint Vitus throughout their most fertile career phase, in the second half of the 1980s, lead vocalist Scott "Wino" Weinrich decided to throw in his towel, dust off his long-in-disuse guitar playing talents, and resurrect his original retro-metal power trio, the Obsessed. Unfortunately, the band's first eponymous album from 1990 (there had been an EP -- the legendary Sodden Jackal -- way back in 1983) was patched together from ancient recordings and contained disappointingly few outstanding songs to recommend it, and it wasn't until the following year's sophomore Lunar Womb that Wino (here also acting as producer) really gave some cause for fans to celebrate his departure from Vitus. Backed by an all-new rhythm section featuring bassist/co-producer Scott Reader (future Kyuss, Unida, etc.) and drummer Greg Rogers, Wino seemed to find his songwriting legs again with instantly memorable numbers like "Brother Blue Steel," "Bardo," and "Back to Zero," even as the years of rust visibly fell away from his sharp and dynamic guitar work (watch for prime solo breaks in "Kachina" and "No Mas"). Elsewhere, "Hiding Mask," "Jaded," and "Endless Circles" are all superlative samples of bite-sized doom -- a Wino specialty (most of his contemporaries being prone to epic waffling) that is abandoned only at some risk by the still quite successful six-minute title track. But then, the appearance of a sub-two-minute hardcore blast in "No Blame" (another trademark of most every Wino album, and revealing of his Washington, D.C., roots) tilts the scales in the other direction, and helps make Lunar Womb about as balanced an album as the Obsessed ever recorded. So much so that it led to their signing by major label Columbia before next effort The Church Within, which, as it turned out, fell well short of Lunar Womb's lofty standards. [Long out of print in its original form, Lunar Womb was finally reissued by Meteor City Records in 2006, enhanced with brand-new artwork and informative liner notes.] (Eduardo Rivadavia, All Music Guide)