I think that today I am in the mood for some good 'ole kick ass fuzzed-out retro rawk 'n roll, so I am making "Bridgeburner" by The Glasspack The Album Of The Day. 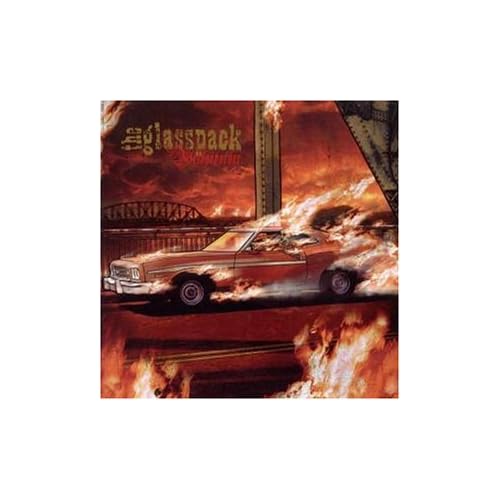 Few bands get by on such devil-may-care magnetism as retro-hard rockers the Glasspack. Back for their third L.P. (and their second for Small Stone), the Louisville lunatics' almost casual ability to rock out can actually leave one questioning their commitment to the gig. And the fact that all of Bridgeburner was cut in a 36-hour haul might only serve to feed the flames of this assumption. But, it only takes a few listens to the searing grooves of "Twenty-Five Cents" or "Oil Pan" to realize just how much passion is involved in their make-up. (Although 'passion' may be a somewhat dubious word to apply to a giddy redneck anthem like "Barn Party"!) Spun together into the Glasspack's sharp-toothed musical grinder, roaring guitar licks, smoking rhythms, and the whiskey-soaked rasp of possessed frontman "Dirty" Dave Johnson spells just one thing: rock & roll, baby! And were it not for an over-abundance of instrumentals -- ranging from manic rockers like "Hydroplane" and "Getting Shitty," to the enigmatically named spacey jam that separates them called "Hairsoup" -- Bridgeburner would be a hard outing to fault. Laid-back closer "Peepshow," although wordless as well, comes garnished with a reliably dazzling solo courtesy of Monster Magnet/Atomic Bitchwax six-string star Ed Mundell, but the Glasspack do sound a little too careless and sloppy on their rendition of the Stones' "Gimme Shelter." In short, although Bridgeburner is definitely a few cards short of a full deck, '70s hard rock revivalists looking for blue-collar honesty and massive 'cojones' are sure to get more than their money's worth. (Ed Rivadavia, All Music Guide)