One of my favorite albums from 2006 was "Metridium Fields" by Giant Squid, so therefore I have decided to make it the Album Of The Day. 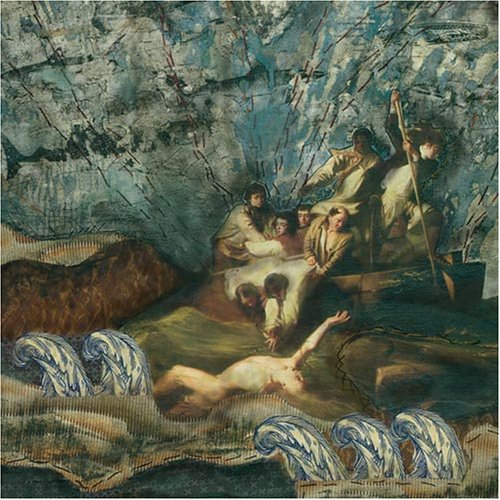 For their debut album, California-to-Texas migrants Giant Squid did something that more groups should, perhaps, do -- they not only released it twice, but recorded it twice. Having first put out Metridium Fields on their own, the bandmembers got back together with engineer Billy Anderson to redo it entirely for their initial release on The End Records. As trivia it's fun enough, but the real proof lies in the sound, and what's interesting about this album is that for all the indie metal tags being thrown around, more than anything else it sounds like a dreamy, doomy early-'70s hard rock effort, as if Jefferson Airplane took songs like "Somebody to Love" to a darker place. Soothing, swirling keyboards, the combined vocals of guitarists Aaron and Aurielle Gregory and steady-as-she-goes tempos all help steer the band a bit back towards the past in enjoyable ways, rather than simply trying to relive them outright. A great example is "Versus the Siren," where the synths in particular sound, wonderfully and curiously, like a parallel cousin to those sounds made famous by both '70s funk and Dr. Dre's G-funk empire -- though admittedly that's where the comparisons end. That said, it's also clearly a product of more recent developments -- the growling, barked choruses on "Neonate" are much more reflective of Eyehategod than Coven, say, while the lingering impact of such groups as the Gathering is perhaps inevitably noticeable given Aurielle's more serene vocal work. When everything comes together at its best, as on "Ampullae of Lorenzini" or "Revolution in the Water," the group finds a good balance between present and past, and while it's still relatively early to determine the group's success, they've made a very promising start. (Ned Raggett, All Music Guide)