Every once in a while I like to slide a classic rock album in as Album Of The Day. This time around, I chose "Outsideinside" by Blue Cheer. This album along with "Vincebus Eruptum" were way ahead of their time. Truly under appreciated classics to say the least. 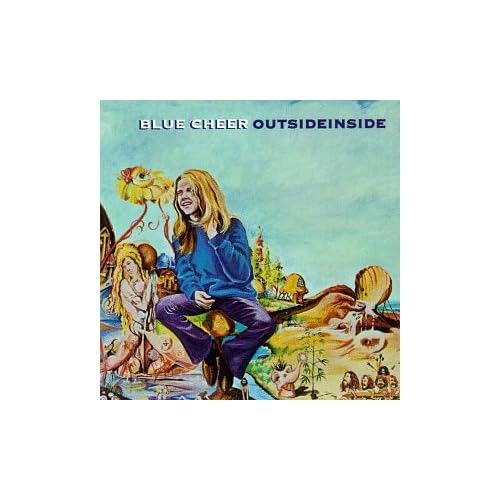 There's a swagger and aggression to Blue Cheer's power blues that can be traced through the decades of heavy metal and the post-metal mutations of hard music. The second of only two Blue Cheer recordings featuring the classic lineup of Leigh Stephens on guitar, Dickie Peterson on bass and lead vocals, and Paul Whaley playing drums, Outsideinside, along with its predecessor, Vincebus Eruptum, ranks among the most underappreciated hard rock collections ever. Blue Cheer's second, more refined offering stands as a testament to the power-for-its-own-sake mentality that helped forge '70s hard rock out of the blues, psychedelia, and energetic rock & roll. Whaley's hyper drumming sounds almost punk during a frantic rework of the Rolling Stone's "Satisfaction" and the instrumental "Magnolia Caboose Babyfinger." This was quite an accomplishment considering that Outsideinside was released a full year before either the Stooges' debut or MC5's Kick Out the Jams. Stephens' fuzzed-out guitar solos shift and weave through each of Outsideinside's nine tracks, but the guitars work best as rhythmic support of Peterson's vocals on the standout tracks "Just a Little Bit" and "Come and Get It." Unfortunately, Blue Cheer simply did not possess the virtuosity to fight through the record's more ambitious moments; when the San Francisco trio tries to cop Hendrix in "Sun Cycle," the music sputters and loses focus. In true metal tradition, critics have generally ignored Blue Cheer's vast musical influence except for the most derivative of bands. Meanwhile, artists like Smashing Pumpkins, Mudhoney, and the Melvins have consistently covered the group both live and in the studio. Anyone interested in the history of hard music will want to familiarize themselves with this exceptional, innovative release. (Vincent Jeffries, All Music Guide)