Album Of The Day-Abdullah-"Graveyard Poetry" (2002) 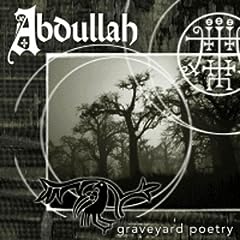 Abdullah's sophomore release improves upon an uneven debut by concentrating more on the band's Stonehenge rock tendencies as opposed to the southern gothic dabbling that previously diluted the band's sound, making Graveyard Poetry the best St. Vitus or Trouble record in ages (the latter is especially evident on "Pantheistic"), with a nice mixture of dirgy, doomsaying downers, mid-tempo grinders, and a complete lack of anything breaking the speed limit (not that this is missed). Most of the tracks go on for several minutes, but even the ones that clock in at only four minutes or so have an epic feel to them, making the disc a plodding affair that's the perfect soundtrack accompaniment to the sounds of bubbling bongwater and the munching of Cheetos. A track that actually crushes bones would be nice, however; maybe the third time will be a charm in that respect. (Brian O'Neill, All Music Guide)