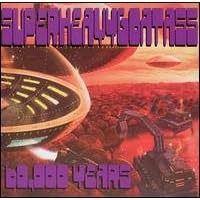 Don't be fooled by the Robert A. Heinlein-inspired sci-fi artwork design gracing Super Heavy Goat Ass' 60,000 Years album (and don't even ask about the title — one can only guess); there are certainly a few elements of space rock to be found here, but not nearly as much as straight-up, butt-kicking hard rock shot through with a good batch of Southern flavorings befitting the band's Austin, TX, home base. In fact, aside from SHGA's self-consciously goofy name, their overall musical aesthetic recalls many of the post-stoner rock generation of the mid-2000s (Solace, Halfway to Gone, Black NASA, etc.) for prizing a somewhat more understated means of songwriting to get their points across (their predecessors often relied on sheer volume and bludgeoning force). That's not to say that most Super Heavy Goat Ass songs lack for any raucousness (they don't), and singer Russell Abbott's gruff, expletive-laced delivery is even more amusingly belligerent than most (his occasional John Garcia-isms thankfully appear to be more accidental than contrived), but it's very likely that impatient stoner rock fans may lose interest before these have a chance to reveal their strengths. That's why, at their best, album highlights "Backside," "Druglord," and "Best Friend" temper their slow-building themes, frequent mid-paced grooves, and loads of distinctive dual-guitar harmonies with some roaring-good riffs to kick them up the ass. Additional standout "SSOB" doesn't even need that help, serving up an especially memorable piece of bluesy space rock (there it is, at last!), while, with incrementally rootsy parting shots such as "Built to Last" and "Soundman," the bandmembers pay their mandatory tribute to the legacy of fellow Texans ZZ Top (by way of Ted "Gonzo" Nugent). Overall, 60,000Years is a highly recommended album for dedicated stoner rock enthusiasts, but not as recommended for the casual fan. (Eduardo Rivadavia, All Music Guide)