The Album Of The Day is "Sahg II" by Sahg. 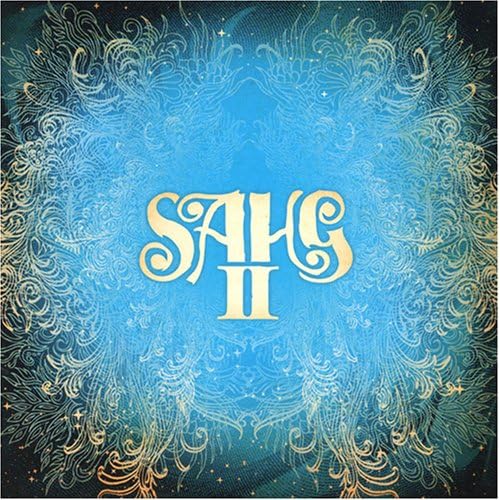 We just have been regaled with an excellent release of Audrey Horne ('Le Fol') and once again we are flabbergasted by a (doom) collective of that area, called Sahg, which includes two members who are also active in Audrey Horne (in King's case no more), more precisely guitarist Thomas Tofthagen and bass player King (Tom Cato Visnes). For the rest the band is made up of vocalist/guitarist Olaf Eversen (Manngard) and drummer Tor Bjarne Bjellan. I was already very positive about their debut album, but Sahg II happens to be even more amazing than the first one.

We find ourselves in the centre of the Bergen (Norway) music scene where many musicians canalize their diverse inspiration in bands of diverging styles. In Sahg's case, it happens to be traditional doom metal with psychedelic overtones. Call it stonerrock, call it influences from Black Sabbath and Led Zeppelin, but what matters is that the band has written nine high-quality songs and they perform them in a powerful, genuine manner.

Sahg gathered quite a lot of success with their debut album, resulting in intensively touring, even in the United States in support of Celtic Frost. They could play at top festivals like Wacken Open Air, Inferno and Hole In The Sky. The second album was not finished without solving unforeseen obstacles. When the first three songs were recorded, the studio was torn to the ground and later on they faced lashings of problems during the long-term recording process. With a serious delay, 'Sahg II' was finally ready to be mixed by Rob Caggiano and Paul Orofino in Millbrook Sound Studios, New York.

Without losing its authentic feel, Sahg shows more own identity on this second album. 'Ascent To Decadence' is a steady rocking track - think of Black Sabbath with Toni Martin - but it has some atmospheric passages with fast and furious guitar skills as well. These fluttering guitars are one of the trademarks of the band and in the distorted 'Echoes Ring Forever' it is relished with psychedelic overtones. 'From Conscious Sleep' is a short instrumental part with dark choir-like chants which remind me a bit of Forsaken. Psychedelic tracks - mindful of the atmosphere of the Sabbath song 'Planet Caravan' - cover us with their compelling charms in the shape of 'Escape The Crimson Sun' and 'Wicked Temptress', while on the other hand heavy mauling rock songs such as 'Pyromancer' and 'By The Toll Of The Bell' make you bang your head. Absolute stunner of 'Sahg II' is the occluding track 'Monomania'; a mammoth composition without equal in terms of psychedelic momentum, and it includes guitar solos, guaranteed to make your flesh creep. Go and see them when they will be touring with Trouble pretty soon! (Vera, Lords Of Metal)