I have been picking older titles recently to feature as Album Of The Day, but decided to give the title to "In The Future" by Black Mountain after listening to it repeatedly over the last week or so. A little more Indie Rock than most of the stuff I post on here, but pretty cool nonetheless. Check it! 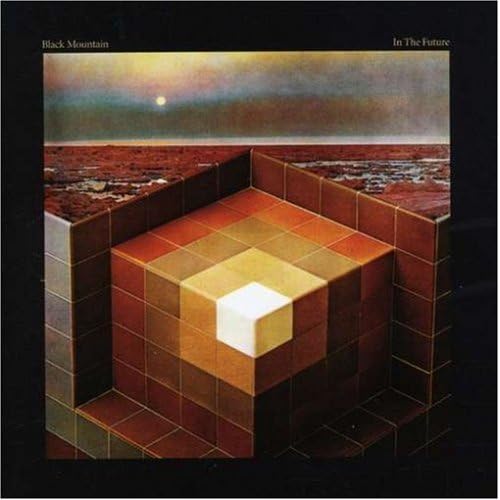 Review:
During the nearly three years between Black Mountain's self-titled debut album and its sophomore full-length In the Future, there had been extensive touring, a first attempt at recording which proved to be a false start of sorts (though some of those songs ended up here), and a kind of development that would seem radical if these Vancouverites weren't so quirky to begin with. Certainly, the roots of this sound are evident on the debut album. It's loaded with trippy neo-psych folk and rock tropes. But these are counterweighted with a drenched-in-prog-and-Sabbath bombast that makes the title seem ironic. If not laugh out loud funny. That's right: prog rock and Black Sabbath-like riffery and knotty, multi-part structures worthy of Greenslade are all entwined with pixie-ish protocol, acid-laced folk (think Melanie meets Sandy Denny meets Grace Slick's early period duets with Marty Balin and Paul Kantner on the Jefferson Airplane's Surrealistic Pillow and Volunteers). The weird thing is, despite its obvious nods to rock collections, including not only Sabbath's Master of Reality but Jethro Tull's Thick as a Brick, Hawkwind's Warrior on the Edge of Time, Peter Hammill's entire Charisma period, Eloy's first three albums, Rush's 2112 (where some of these rather drenched-in-warped-myth lyrics were derived from; but then they're Canadians too), and Led Zep's Physical Graffiti, with a touch of the optimism of Thunderclap Newman and Graham Nash -- all is tempered by Neil Young's sleepy delivery -- sometimes in the same song! The sheer heaviness of tracks like "Stormy High," that wails out of the gate with guitars in full pummel riffage, fuzzed out bassline, and floor tom, bass drum, hi hat fury are stretched out by layers of Mellotrons! Then, Stephen McBean and Amber Webber begin wailing wordlessly à la "Immigrant Song," before McBean takes the lead vocal and you're ready for your space rock pith helmet! Where's Michael Moorcock when you need him? He's about all that's missing. It gets more insistent before it lets up with the starting-in-fifth-gear "Tyrants," that winds and wends its way through a multi-dimensional journey densely packed with sonic wonkery, key and time changes, and the feeling of a journey through time and space for over eight minutes. The sheer sonic throb is balanced by long, droning Mellotron and analogue synth drones, tribal, chant-like drumming, and the pleading, world-weary, vulnerable voice of McBean. It's quite a thing, but it's only a precursor to the truly epic "Bright Lights" near the end of the set that rages on for nearly 17 minutes. Fuzzy electrics, shimmering acoustics, and trance-like keyboards flit in and out between the alternating vocals of McBean and Webber. The music picks up intensity, shifts direction numerous times, and careens across the rock and folkscapes of rock's history from the late '60s through the '70s with great focus, wit, and ambition. There are other things like this here, too, with the utterly beautiful and tender lysergic folk explorations in "Stay Free," where unplugged six-strings, tambourine, McBean's falsetto, and Webber's harmony are seamless, as of one voice. The lyrics are direct, but the sheer sparseness of the mix (organs hover in the backdrop) stands in such sharp contrast to "Wucan" and "Tyrant" that it's like a wake-up call from the ether. (Movie music directors, take heed: this is the one you want for those long reflective moments where the two main characters have parted to rethink their positions.) It picks up, but never too much; the bridge is wonderfully constructed with just enough ornamentation to take it up a notch texturally and dynamically. "Wild Wind," clocking in under two minutes could be a lost Kevin Ayers' outtake. It's only a shame it's so brief. "Evil Ways" -- no relation to the Santana number -- is all metallic stoner rock with rumbling, quaking tom toms, piercing guitars, and huge organs challenging one another to overcome the vocals. As atrocious as this all sounds, perhaps, it's actually quite wonderful and it works without faltering. For what it is, is a stunning extension of the root sound Black Mountain arrived with. Part of the credit has to go to John Congleton for his amazing mix. It's packed with stuff, but there's enough space here, and wonderfully warm atmospheres, to bring the listener right into the deeper sonic dimensions that Black Mountain is trying to create. That it's done without artificial sounding punch up or tons of digital effects makes it come together as a whole. There is no sophomore slump here. (Thom Jurek, All Music Guide)