On Saturday September 30, 2017 at 3:00 PM EST all hell will break loose on the City of Pittsburgh, PA. An event of epic proportions, 17 killer Stoner Rock/Doom/Metal bands are set to ignite the two stages of Cattivo in the Lawrenceville section of the city. This festival is the first of its kind for Pittsburgh and I say it is about damn time! Event organizer Shy Kennedy (Horehound/Blackseed Records) has excelled at putting together such a fine collection of bands, especially by nabbing Pittsburgh-based doom legends Penance (Alpha & Omega lineup). Growing up in the suburbs of Pittsburgh I am a little giddy about this festival. From the scorching NWOBHW sounds of Pittsburgh's own Lady Beast to the instrumental Doomy Jazz of  Philly's Stinking Lizaveta, there is enough to appease the tastes of everyone attending.

For the overzealous, there will be an acoustic pre-fest at the Full Pint Wild Side Pub, click here for more info. 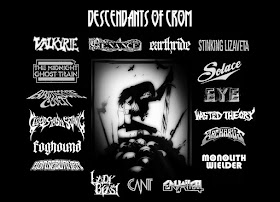 Have a listen to the bands:

The mighty Swamp Ritual hail from Missoula Mt. (as does yours truly), so I was more then pleased to see this 5 song gem of fuzzed out heaviness in my emails. Being a fan of the loud bass and drum duo since early 90's acts like Godheadsilo and later acts like Big business and Year of the Cobra, Sunchaser fits right in holding their own unique sound.. let the tripped out psychedelic 13 min Bearded Dragon take you for a little ride and you'll know what I mean.
As I've stated here before I like things loud and heavy and Swamp Ritual are just that, as well as mixing tempo's with catchy foot stomping anthemic vox to straight no vocal sludge instrumentals.
Catch them on tour 9-21 starting in Portland Oregon through 10-13 with one of my favorite bands Disenchanter.
Buy the tunes with the bandcamp link below, its name your own price.
And if you catch them live buy the merch and support your local venues.
As I just witnessed in San Jose for Epicenter 2017, Heavy Rock is alive and well!
-Jon- 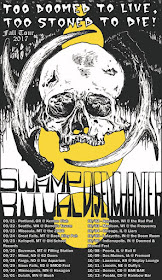 At the beginning of 2015, we were introduced to a sludge/doom band from Bengaluru, India, with their debut full-length record Stereolithic Riffalocalypse, and it blew us away (review here), so it was sad that we recently heard that Shepherd have decided to call it a day. However, before they leave us for good, they've have released a split record with fellow Indian band Death By Fungi, who onslaught us with a hardcore edge, and it's a nice stamp in the face to remember the band by.

Perhaps it's because they're sharing a record with a hardcore band, or it was a direction that the band were heading down before they called it a day, but Shepherd have lost some of their doomier aspects (just some though) and gone for full on sludge meets hardcore, with elements of fuzzy djent in there too (you remember djent? That musical genre that lasted the summer of 2009?), and it's a sound that's exciting to behold. The record opens with five tracks from Shepherd, with 'Agents of Nihil' setting the tone with a bleak and frightening monologue from the climax of the film The Exorcist 3, before the chaotic sludge explosion assaults you, while their almost trademark chugging bass heavy riffs drive the spine of the song forward, a sound which all us doom/sludge heads will cling to. The vocals mix with light and darker growls, while they even find time to shred while the drums go off like a pneumatic drill. Shepherd, haven't lost their sound, so much as shoved a firecracker up its arse and honed the results. Our highlight of the entire record is 'Hope Comes Gnawing' with an almost funky sludge bassline continues throughout, both exciting and frightening in the same breath. 'Fungalord' and 'Weed Dealer' (Shepherd have always been a band who like to have fun with their song titles, just see 'Turdspeak' or 'Black Cock of Armageddon') are tracks which are both excellent break-neck speed sludge tracks with elements of stoner added in for, well, why the hell not? You can never really relax with these guys as they can change time signatures and pull out devilish riffs from out of nowhere. We're going to miss this band.

While the hardcore genre may not be something with which you guys out there are necessarily drawn to straight away (this being a site for the best stoner/doom/sludge/psych etc), Death By Fungi are not a band that you should ignore. While many of the trademark hardcore elements are there with constant snare beats, breakneck speed playing, high velocity shouting vocals, there are definite elements of something just that bit heavier with this band, just take the riffs with 'Edgelord Breakdown' melting your face with it's furious assault throughout and the anger of the vocals screaming "You've failed me so many times!", they take the elements of sludge which Shepherd bring to the table and put their own spin on it, and it becomes an invigorating and refreshing listen. 'Dead Soil' morphs into a sound which is like doom on acid, with a fluctuating heart rate that'll kill you with a smile on your face.

Even though Shepherd have sped up their sonic game, they're still the slower, sludgier of the two bands here, and the compliment each other well. If this indeed does prove to be Shepherd's final opus (bands do get back together after all) then it's a mighty fine closing on a short, but heavy-as-fuck career, one which you're a fool to have missed so far (but thanks for introducing us to Death By Fungi on your way out). Get this record now and give your ears a good kicking!

This!  This.  This is something special.  The attraction was immediate, unstoppable and obviously inspiring as it got me to write my first review of the year and this is September.  People, you need to hear this record.  Howling Giant, the Nashville, Tennessee three piece tickled my fancy with this album and made me write a review.  My fancy so likes their brand of tickle.

As the second release of an expected three EP set, Black Hole Space Wizard: Part 2 is an impressive endeavor.  The tones are perfect.  Roger Mark's bass has thicker fuzz than meat left on the counter upon your return from a cruise around the world, best displayed in the song Pioneer.  Tom Polzine's guitar ranges from the massive crunch of a drill rig burrowing to the earth's core in Circle of Druids all the way to a wind chime on a sun bleached porch during the beautiful The Forest Speaks.  The drumming of Zach Wheeler is outstanding throughout, a true joy to hear as he pushes and pulls the tempo with intrepid style and unrepentant dominance.  The addition of the organ/synth work by Drew Harakal is so tastefully done and understated but yet adds so very much to the overall sound of the record.   Polzine, Marks and Wheeler all contribute to the vocal harmonies which wrap up this gift from outer space with a message of ascension against all odds and evils encountered.

Black Hole Space Wizard: Part 2 is a journey you have to take, not because it is our job or what is expected from us, but because it is what is right.  The album is a heavy, progressive, quantum theory of groove that will take you through the wormhole with a smile on your face for the entire ride.

Absolutely one of my favorites this year and will, without question, be making my year end list.

You may have noticed that our posts have been few and far between as of late. Rest assured, we are still here and we will have new bands for you to check out but possibly in different ways than what you are accustomed to. Over the nearly ten years of our existence, we have had 20-plus writers come and go at Heavy Planet and one of the hardest things to do is to retain good talent, primarily due to time constraints. Everybody has busy lives including myself. So please stay tuned and in the meantime check out our Facebook page for daily posts from my main man Stump!
RegR at 7:36:00 PM No comments:
Share
‹
›
Home
View web version