"Back to the River" is the first single off of the upcoming release "Living Ghosts". The album will be released on 25th September through Fuzzorama Records. For more details please check out the following links: Fuzzorama | Facebook | New Damage
RegR at 4:20:00 AM No comments:
Share 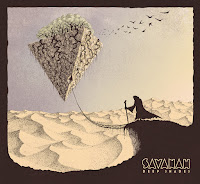 A rather unique take on the Stoner/Doom genre is set forth by Austrian band Savanah. What sets the band apart from others is the lead singer's interesting vocal prowess. It is a deep and nasally bellow which sometimes suggests Maynard (Tool) and then digs into somewhere between Glenn Danzig (Danzig, Misfits) and David Gahan (Depeche Mode), yep I did say interesting. The musicianship is tight as hell and the riffing is phenomenal. The bass guitar barrels through your chest like an eighteen wheeler and is steadied by a unwavering rhythm. The songs build and become quite hypnotic in the sense that you are being drawn into the music that engulfs you. Favorite track: Deep Shades. 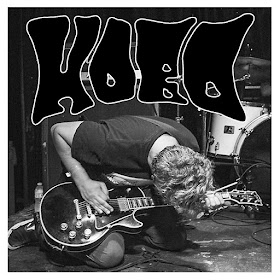 HOBO - Go Home Without Yourself
We’ve been following these guys since we featured them back in ’13 in Sunday Sludge with their demo filling us with sharp sludge delight, but now with their debut full-length LP, all our hopes have come into fruition with gloriously heavy pounding effect.

Like all good sludge bands, HOBO start off heavy, continue heavy, and end heavily. The record opens with ‘Blood Horse’ (also on The Shit Hands ep) which basis its song structure around gut-churning bass lines and low tuned, well, everything, from subtly heavy drumming to darkly savage vocals that charge the song into submission. Where HOBO differ from many other sludge bands is that their songs are shorter, much shorter in fact, with the majority of songs on Go Home Without Yourself just passing the two-minute mark. It’s a punk ethos of the band coming in, playing their music, making their point, then quickly fucking off before anyone knows what’s just happened.

The album grows as each track clambers over the last with its aggressive party-like sludge thrashing your body to the floor with highlights ‘Bottom Shelf’ and ‘Piss Stank’ paying particular attention to the tag of “SLUDGE TILL YOU DIE” as you girate like a lunatic to the groove-laden guitar lines with glee. The brilliantly titled ‘Go Home Without Your Teeth’ and album closer ‘That’s It!’ exemplify what HOBO do best, and that would be joyous sludge if you haven’t been paying attention so far.

HOBO come across like early versions of High on Fire and Mastodon jamming with each other in their rawest forms, in a dank basement, with a disco ball, lots of cans of beer, all in their teens, recording with no production values (because they’re for the glamorous bands); this is music in its purest form, and, well, you can’t really do real sludge any other way. 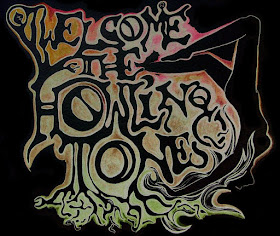 
Farnborough, Hampshire, UK, is not known for its rich history of the blues, but somehow, the five guys of  Welcome The Howling Tones have managed to twin the town with Memphis, Tennessee, on the quite stunning debut LP Green & Blues. This is in large part thanks to two main things: the bassy percussion intertwined with a lead guitar twang emanating somewhere from the deep south, and secondly the powerful vocals of Iain ‘Catscratch’ Turner that drive each song with echoes of hurt, passion, and guttural energy.

Green & Blues opens with three tracks of unadulterated blues rock majesty, songs that Clutch would be quite proud to own for themselves. ‘Deep River Blues’ builds, crashes, rebuilds and crushes some more with gentle guitar tones carrying the spine of the song and its centred emotional core, before all instruments combine to create gorgeous blues overtones, before the vocals cut like a blunt rusty knife, silencing all outside noise, just holding your attention long enough for that “woah” moment. ‘Eyes To Hypnotise’ teeters on the edge of stoner rock as the driving rhythm sections and aggressive vocal style powers the song through its five minutes of desert rock crossover, while ‘Broken Man’ is more stripped down blues groove number, lead guitar led with its soul laid bare, and it’s simply a beautiful track.

The rest of the record carries along the same grove/blues/stoner feel with some jams becoming party numbers (‘Dip Me in Mud’), some soulful tunes (‘Burn My Bones’), and others just downright bluesy master classes (‘She’s My Kind Of Woman’).

One thing that has to be said about this band’s debut record is that it is an almighty impressive beast, fooling you into thinking you’re listening to a band who’ve been riding the scene for decades, with a songbook full of memories, ideas, and a life long lived. Green & Blues is a record that will sit comfortably alongside 1950’s howling blues records and modern day Palm springs desert scene grooves, and it deserves such high acclaim. 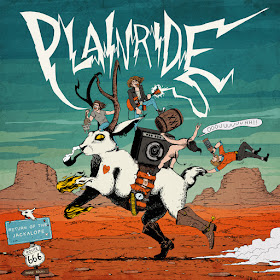 Plainride - Return Of The Jackalope
The debut record from Cologne, Germany’s Plainride is 13 tracks of pure hard stoner rock epicness, you know that kind that that makes your arse cheeks tighten with excitement? That kind! No, just me? Oh well then.

The band don’t sing about much in the way of deep, or life-changing events, but instead exemplify everything that they love: cars, beer, beards, and partying! “Today I killed my father with a shovel and a shotgun” opens ‘Salt River’ as the band carve their way through four-and-a-half minutes of simple and effective fists to the wall stoner/heavy rocking (tempted to use the popular spelling of “rawk”, but we just can’t bring ourselves to do it). The vocals have a great southern bluesy twang to them, soaked like an aged whiskey malt to its purest form.

There are many bands out there doing a similar thing to Plainride, but they don't have the same effect as it takes more than just a cool sounding vocalist, the right look and origins, you need what Plainride have in abundance: awesome songs! From the badass rock of the title track, the blues-heavy groove of ‘(The Beards Upon) Mt Rushmore’, the momentary respite in the acoustic ‘Vengeance’, and the straight-up party stoner anthem of ‘Beermachine’, the four Germans have crafted a solid album of great songs, heavy riffs, and downright rocking that’ll keep Return Of The Jackalope on your summer stereo for a long time, just make sure you’re fully stocked up on beer!